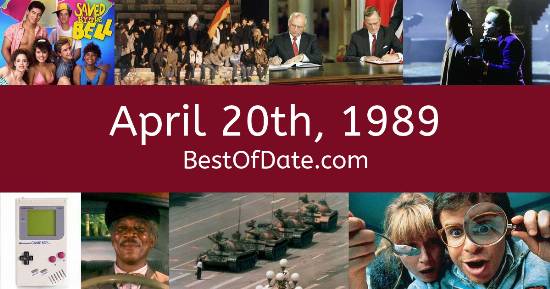 Songs that were on top of the music singles charts in the USA and the United Kingdom on April 20th, 1989.

The date is April 20th, 1989 and it's a Thursday. Anyone born today will have the star sign Taurus. The summer of 1989 is drawing closer and temperatures have started to rise.

In America, the song Like A Prayer by Madonna is on top of the singles charts. Over in the UK, Eternal Flame by The Bangles is the number one hit song. George W. Bush Snr. is currently the President of the United States and the movie Major League is at the top of the Box Office.

In China, the Tiananmen Square protests are occurring. The United Kingdom is currently in shock after 94 people are tragically killed in a human crush during a soccer game between Liverpool and Nottingham Forest. If you were to travel back to this day, notable figures such as Ruhollah Khomeini, Mel Blanc, Rebecca Schaeffer and Bette Davis would all be still alive.

On TV, people are watching popular shows such as "Columbo", "ThunderCats", "ALF" and "The Wonder Years". Meanwhile, gamers are playing titles such as "Ultima IV: Quest of the Avatar", "Maniac Mansion ", "Super Mario Bros. 3" and "Mega Man 2". Kids and teenagers are watching TV shows such as "The Smurfs", "Muppet Babies", "Count Duckula" and "Garfield and Friends".

Popular toys at the moment include the likes of Pound Puppies, Laser Tag, Popples and Jenga.

If you are looking for some childhood nostalgia, then check out April 20th, 1995 instead.

Margaret Thatcher was the Prime Minister of the United Kingdom on April 20th, 1989.

Enter your date of birth below to find out how old you were on April 20th, 1989.