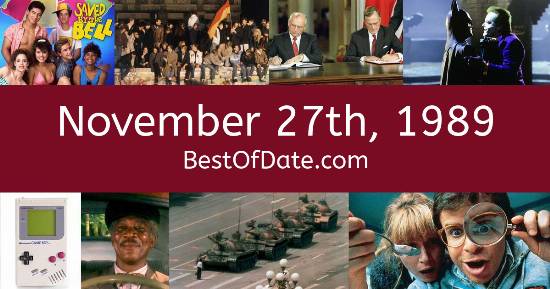 Songs that were on top of the music singles charts in the USA and the United Kingdom on November 27th, 1989.

The date is November 27th, 1989 and it's a Monday. Anyone born today will have the star sign Sagittarius. In America, Thanksgiven Day and Black Friday have recently come and passed. People are now beginning to look forward to Christmas.

It's November, so the evenings are getting darker and the days are getting colder. In America, the song Blame It On The Rain by Milli Vanilli is on top of the singles charts. Over in the UK, You Got It by New Kids on the Block is the number one hit song.

It's 1989, so the airwaves are being dominated by music artists such as Madonna, The Bangles, Phil Collins, Roxette, Milli Vanilli and The B-52s. If you were to travel back to this day, notable figures such as Sammy Davis, Jr, Stevie Ray Vaughan and Roald Dahl would all be still alive. On TV, people are watching popular shows such as "The Smurfs", "My Two Dads", "The Wonder Years" and "Quantum Leap".

If you are looking for some childhood nostalgia, then check out November 27th, 1995 instead.

South Korean rapper.
Born on November 27th, 1992
He was born exactly 3 years after this date.

George W. Bush Snr. was the President of the United States on November 27th, 1989.

Margaret Thatcher was the Prime Minister of the United Kingdom on November 27th, 1989.

Enter your date of birth below to find out how old you were on November 27th, 1989.

Here are some fun statistics about November 27th, 1989.