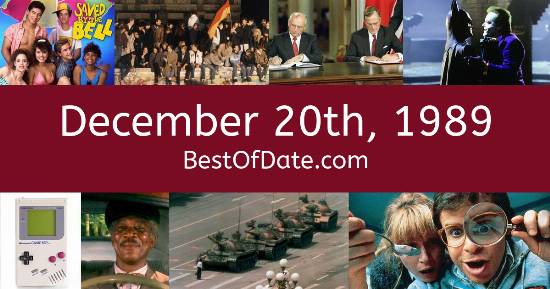 Songs that were on top of the music singles charts in the USA and the United Kingdom on December 20th, 1989.

The date is December 20th, 1989 and it's a Wednesday. Anyone born today will have the star sign Sagittarius. Christmas Day of 1989 is fast approaching and the excitement is building. Department stores are thronged with Christmas shoppers.

If you were to travel back to this day, notable figures such as Sammy Davis, Jr, Stevie Ray Vaughan and Roald Dahl would all be still alive. On TV, people are watching popular shows such as "Dallas", "Knots Landing", "My Two Dads" and "Roseanne". Meanwhile, gamers are playing titles such as "Ultima IV: Quest of the Avatar", "Mega Man 2", "SimCity" and "Herzog Zwei".

Kids and teenagers are watching TV shows such as "Muppet Babies", "The Cosby Show", "Married... with Children" and "Fireman Sam". If you're a kid or a teenager, then you're probably playing with toys such as Speak & Spell, My Little Pony (figures), Teenage Mutant Hero Turtles figures and Lego Pirates.

If you are looking for some childhood nostalgia, then check out December 20th, 1995 instead.

Singer.
Born on December 20th, 1990
She was born exactly one year after this date.

Soccer player.
Born on December 20th, 1991
He was born exactly 2 years after this date.

Chinese actor.
Born on December 20th, 1998
He was born exactly 9 years after this date.

George W. Bush Snr. was the President of the United States on December 20th, 1989.

Margaret Thatcher was the Prime Minister of the United Kingdom on December 20th, 1989.

Enter your date of birth below to find out how old you were on December 20th, 1989.

Here are some fun statistics about December 20th, 1989.