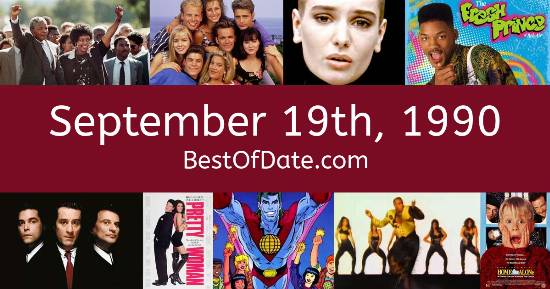 These songs were on top of the music charts in the United States and the United Kingdom on September 19th, 1990.

The movie "Postcards from the Edge" was at the top of the Box Office on this day.

The date is September 19th, 1990, and it's a Wednesday. Anyone born today will have the star sign Virgo. Schools and colleges are starting again and Autumn has officially arrived. As a result, temperatures are beginning to cool and trees are starting to shed their leaves.

The earthy smells of fall have started to fill the air. In America, the song Release Me by Wilson Phillips is on top of the singles charts. Over in the UK, The Joker by Steve Miller Band is the number one hit song.

George W. Bush Snr. is currently the President of the United States, and the movie Postcards from the Edge is at the top of the Box Office. In the United Kingdom, Margaret Thatcher is the current Prime Minister. Texting is not a thing yet. Instead, people are using landline phones and pagers. Furthermore, the vast majority of people still have no idea what "the Internet" is.

A new sitcom called the "Fresh Prince of Bel Air" has just started being aired on television. Martin Scorsese's gangster film "Goodfellas" is currently being shown in movie theaters. If you were to travel back to this day, notable figures such as Roald Dahl, John Bardeen, Miles Davis and Freddie Mercury would all be still alive.

If you're a kid or a teenager, then you're probably playing with toys such as Transformers, Mr Frosty, Popples and Teenage Mutant Hero Turtles figures.

These are trending news stories and fads that were prevalent at this time. These are topics that would have been in the media on September 19th, 1990.

News stories and other events that happened around September 19th, 1990.

Check out our personality summary for people who were born on September 19th, 1990.

Television shows that people were watching in September, 1990.

Popular video games that people were playing in September of 1990.

If you are looking for some childhood nostalgia, then you should check out September 19th, 1996 instead.

George W. Bush Snr. was the President of the United States on September 19th, 1990.

Margaret Thatcher was the Prime Minister of the United Kingdom on September 19th, 1990.

Find out what your age was on September 19th, 1990, by entering your DOB below.
This information is not saved on our server.

Here are some fun statistics about September 19th, 1990.