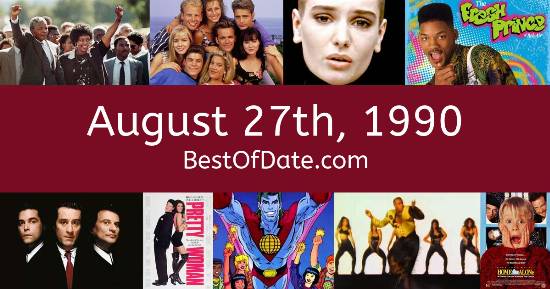 Songs that were on top of the music singles charts in the USA and the United Kingdom on August 27th, 1990:

The date is August 27th, 1990 and it's a Monday. Anyone born today will have the star sign Virgo. The summer of 1990 is coming to an end and fall is just around the corner.

In America, the song If Wishes Came True by Sweet Sensation is on top of the singles charts. Over in the UK, Itsy Bitsy Teeny Weeny Yellow Polka Dot Bikini by Bombalurina is the number one hit song. George W. Bush Snr. is currently the President of the United States and the movie Darkman is at the top of the Box Office.

Despite international condemnation and demands from the UN Security Council, Iraqi forces are continuing to occupy Kuwait. There is currently outrage following president Saddam Hussein's decision to appear on Iraq state television with western hostages, including a young British boy called Stuart. Hussein has denied using the hostages as a human shield. In Europe, the countries of West Germany and East Germany have announced that they will officially reunite on October, 3rd. Music fans are in shock following the news that American musician Stevie Ray Vaughan has died in a helicopter crash near East Troy, Wisconsin.

On TV, people are watching popular shows such as "Dallas", "Only Fools and Horses", "Family Matters" and "Twin Peaks". Meanwhile, gamers are playing titles such as "Gain Ground", "Super Mario Land", "Batman: The Video Game" and "Super Mario World". Children and teenagers are currently watching television shows such as "Pingu", "Garfield and Friends", "Roseanne" and "Babar".

Celebrities, historical figures and noteable people who were born on the 27th of August:

National holidays and famous events that fall on the 27th of August:

Who was the Prime Minister of the United Kingdom on August 27th, 1990?

Enter your date of birth below to find out how old you were on August 27th, 1990.

Looking for some nostalgia? Here are some Youtube videos relating to August 27th, 1990. Please note that videos are automatically selected by Youtube and that results may vary! Click on the "Load Next Video" button to view the next video in the search playlist. In many cases, you'll find episodes of old TV shows, documentaries, music videos and soap dramas.