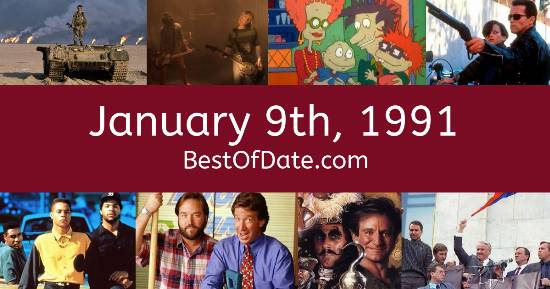 These songs were on top of the music charts in the United States and the United Kingdom on January 9th, 1991.

The date is January 9th, 1991, and it's a Wednesday. Anyone born today will have the star sign Capricorn. The Christmas holiday season is long over, the decorations have been taken down and a sense of normality has returned.

In America, the song Justify My Love by Madonna is on top of the singles charts. Over in the UK, Bring Your Daughter To The Slaughter by Iron Maiden is the number one hit song. George W. Bush Snr. is currently the President of the United States, and the movie Home Alone is at the top of the Box Office.

In El Salvador, three US soldiers have been killed after leftist guerrillas shot down a military helicopter. Former baseball star Pete Rose has just been released from prison after serving a five month sentence for tax fraud. If you were to travel back to this day, notable figures such as John Bardeen, Miles Davis, Freddie Mercury and Robert Reed would all be still alive.

On TV, people are watching popular shows such as "The Cosby Show", "Who's the Boss?", "Full House" and "The Wonder Years". Meanwhile, gamers are playing titles such as "SimCity", "DuckTales", "Railroad Tycoon" and "Castle of Illusion Starring Mickey Mouse". Kids and teenagers are watching TV shows such as "Noozles", "Art Attack", "Rosie and Jim" and "The Fresh Prince of Bel-Air".

Popular toys at the moment include the likes of the Easy-Bake Oven, Sylvanian Families, the Sega Genesis / Mega Drive and Yo-yo.

These are trending news stories and fads that were prevalent at this time. These are topics that would have been in the media on January 9th, 1991.

News stories and other events that happened around January 9th, 1991.

Check out our personality summary for people who were born on January 9th, 1991.

Television shows that people were watching in January, 1991.

Popular video games that people were playing in January of 1991.

If you are looking for some childhood nostalgia, then you should check out January 9th, 1997 instead.

George W. Bush Snr. was the President of the United States on January 9th, 1991.

John Major was the Prime Minister of the United Kingdom on January 9th, 1991.

Find out what your age was on January 9th, 1991, by entering your DOB below.
This information is not saved on our server.

Here are some fun statistics about January 9th, 1991.