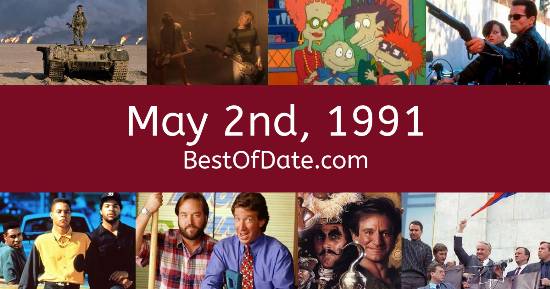 Songs that were on top of the music singles charts in the USA and the United Kingdom on May 2nd, 1991.

The date is May 2nd, 1991 and it's a Thursday. Anyone born today will have the star sign Taurus. The summer of 1991 has finally arrived. The weather has warmed up and the evenings are brighter than usual.

In America, the song Baby Baby by Amy Grant is on top of the singles charts. Over in the UK, It's In His Kiss by Cher is the number one hit song. George W. Bush Snr. is currently the President of the United States and the movie Out for Justice is at the top of the Box Office.

A new family sitcom series called "Dinosaurs" has just debuted on ABC. If you were to travel back to this day, notable figures such as Miles Davis, Freddie Mercury, Robert Reed and Anthony Perkins would all be still alive. On TV, people are watching popular shows such as "Married... with Children", "Teenage Mutant Ninja Turtles", "The Wonder Years" and "Roseanne".

Meanwhile, gamers are playing titles such as "Golden Axe", "Phantasy Star II", "Wing Commander" and "Railroad Tycoon". Children and teenagers are currently watching television shows such as "Fireman Sam", "Hey Dude", "The Simpsons" and "Blossom". Popular toys at the moment include the likes of the Easy-Bake Oven, Sylvanian Families, the Sega Genesis / Mega Drive and G.I. Joe (figures).

Notable events that occurred around May 2nd, 1991.

If you are looking for some childhood nostalgia, then check out May 2nd, 1997 instead.

Historical weather information for May 2nd, 1991.

John Major was the Prime Minister of the United Kingdom on May 2nd, 1991.

Enter your date of birth below to find out how old you were on May 2nd, 1991.