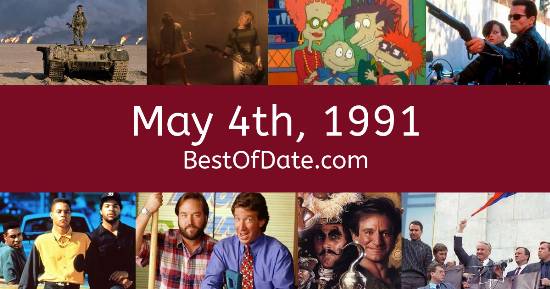 Songs that were on top of the music singles charts in the USA and the United Kingdom on May 4th, 1991.

The date is May 4th, 1991 and it's a Saturday. Anyone born today will have the star sign Taurus. Currently, people are enjoying their weekend.

The summer of 1991 has finally arrived. The weather has warmed up and the evenings are brighter than usual. In America, the song Baby Baby by Amy Grant is on top of the singles charts. Over in the UK, It's In His Kiss by Cher is the number one hit song.

George W. Bush Snr. is currently the President of the United States and the movie Oscar is at the top of the Box Office. In the United Kingdom, John Major is the current Prime Minister. In fashion, many of the trends from the late 80s are still popular. Colored tights, denim overalls, leotards, flannel shirts and shoulder pads are all fashionable at the moment.

A new family sitcom series called "Dinosaurs" has just debuted on ABC. The final episode of "Dallas" has just been aired on television. The series had been running since 1978. In music news, Sweden have just won the 1991 Eurovision Song Contest with "Fångad av en stormvind" by Carola. The event was hosted in Rome, Italy.

On TV, people are watching popular shows such as "Cheers", "The Cosby Show", "Murder, She Wrote" and "Married... with Children". Meanwhile, gamers are playing titles such as "Golden Axe", "Wing Commander", "Railroad Tycoon" and "Castle of Illusion Starring Mickey Mouse". Kids and teenagers are watching TV shows such as "The Real Ghostbusters", "Full House", "Clarissa Explains It All" and "Dinosaurs".

If you're a kid or a teenager, then you're probably playing with toys such as the Easy-Bake Oven, Sylvanian Families, the Game Boy and the Sega Genesis / Mega Drive.

Notable events that occurred around May 4th, 1991.

Historical weather information for May 4th, 1991.

John Major was the Prime Minister of the United Kingdom on May 4th, 1991.

Enter your date of birth below to find out how old you were on May 4th, 1991.

Leave a comment and tell everyone why May 4th, 1991 is important to you.