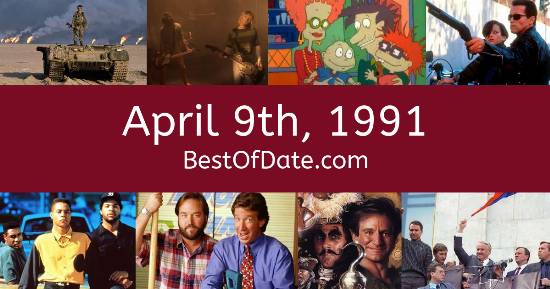 Songs that were on top of the music singles charts in the USA and the United Kingdom on April 9th, 1991.

The movie "Teenage Mutant Ninja Turtles II" was at the top of the box office on April 9th, 1991.

The date is April 9th, 1991 and it's a Tuesday. Anyone born today will have the star sign Aries. The summer of 1991 is drawing closer and temperatures have started to rise.

In America, the song I've Been Thinking About You by London Beat is on top of the singles charts. Over in the UK, The One And Only by Chesney Hawkes is the number one hit song. George W. Bush Snr. is currently the President of the United States and the movie Teenage Mutant Ninja Turtles II is at the top of the Box Office.

It's 1991, so the airwaves are being dominated by artists such as Bryan Adams, Michael Jackson, Roxette, R.E.M., Color Me Badd and Paula Abdul. In the Middle East, Operation Desert storm has recently come to an end after a short ground war between US-led forces and the Iraq military. President Bush has declared that the country of Kuwait has been liberated. Meanwhile, an anti-Saddam uprising has started in the Iraqi city of Basra. In Europe, the USSR is continuing to disintegrate. Georgia has recently declared its independence and the first group of Soviet troops have started to leave Poland.

If you're a kid or a teenager, then you're probably playing with toys such as Jenga, the Ghostbusters Proton Pack, the Sega Genesis / Mega Drive and Lego Pirates.

If you are looking for some childhood nostalgia, then check out April 9th, 1997 instead.

George W. Bush Snr. was the President of the United States on April 9th, 1991.

John Major was the Prime Minister of the United Kingdom on April 9th, 1991.

Enter your date of birth below to find out how old you were on April 9th, 1991.

Here are some fun statistics about April 9th, 1991.