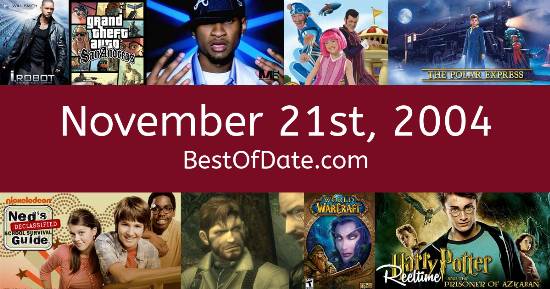 These songs were on top of the music charts in the United States and the United Kingdom on November 21st, 2004.

The top "Box Office" movie on this date was the film "The Incredibles".

The date is November 21st, 2004, and it's a Sunday. Anyone born today will have the star sign Scorpio. Currently, people are enjoying their weekend.

In America, Thanksgiven Day of 2004 is just around the corner. It's November, so the evenings are getting darker and the days are getting colder. In America, the song My Boo by Usher & Alicia Keys is on top of the singles charts.

Over in the UK, Vertigo by U2 is the number one hit song. George W. Bush Jnr. is currently the President of the United States, and the movie The Incredibles is at the top of the Box Office. In the United Kingdom, Tony Blair is the current Prime Minister.

Internet users are using MSN Messenger to chat with each other online. It's 2004, so the music charts are being dominated by the likes of Usher, Alicia Keys, Maroon 5, OutKast, Mario Winans, the Terror Squad and Ciara. If you were to travel back to this day, notable figures such as Dimebag Darrell, Johnnie Cochran, Pope John Paul II and Luther Vandross would all be still alive.

On TV, people are watching popular shows such as "The Royle Family", "Alias", "Battlestar Galactica" and "House". Meanwhile, gamers are playing titles such as "Prince of Persia: The Sands of Time", "Harry Potter and the Philosopher's Stone", "Football Manager 2005" and "Metal Gear Solid 3: Snake Eater". Children and teenagers are currently watching television shows such as "Malcolm in the Middle", "Jimmy Neutron", "Peppa Pig" and "Unfabulous".

These are trending news stories and fads that were prevalent at this time. These are topics that would have been in the media on November 21st, 2004.

News stories and other events that happened around November 21st, 2004.

Check out our personality summary for people who were born on November 21st, 2004.

Television shows that people were watching in November, 2004.

Popular video games that people were playing in November of 2004.

If you are looking for some childhood nostalgia, then you should check out November 21st, 2010 instead.

George W. Bush Jnr. was the President of the United States on November 21st, 2004.

Tony Blair was the Prime Minister of the United Kingdom on November 21st, 2004.

Find out what your age was on November 21st, 2004, by entering your DOB below.
This information is not saved on our server.

Here are some fun statistics about November 21st, 2004.