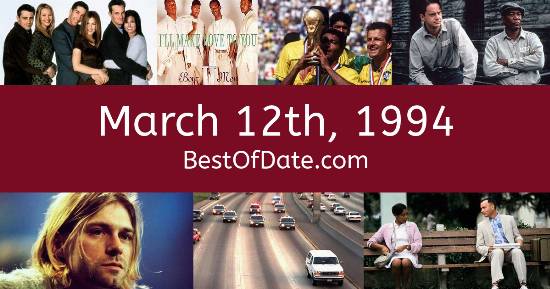 Songs that were on top of the music singles charts in the USA and the United Kingdom on March 12th, 1994:

The date is March 12th, 1994 and it's a Saturday. Anyone born today will have the star sign Pisces. Currently, people are enjoying their weekend.

Bill Clinton is currently the President of the United States and the movie Guarding Tess is at the top of the Box Office. In the United Kingdom, John Major is the current Prime Minister. In fashion, "grunge" clothing has declined in popularity and women are beginning to wear form-fitting outfits such as slip dresses and pencil skirts. Movies such as Clueless and The Craft have popularized the "sexy school girl" look.

It's 1994, so radio stations are being dominated by the likes of All-4-One, Boyz II Men, R. Kelly, Céline Dion, Bruce Springsteen, Bryan Adams, Meat Loaf, Bon Jovi, Wet Wet Wet, Rednex and Mariah Carey. In Europe, a war is continuing to rage on in Bosnia and Herzegovina. US troops have withdrawn from Somalia earlier than expected. Initially, the deadline had been set for March 31st.

The media is reporting that Nirvana front man Kurt Cobain has woken from his coma and is now on the path to recovery. Their had been fears for Cobain's life after he overdosed on Rohypnol and champagne in Rome, Italy, at the start of this month. In music news, rock band Nine Inch Nails have released their second album "The Downward Spiral". In the United Kingdom, the first female priests have been ordained by the Church of England.

On TV, people are watching popular shows such as "Teenage Mutant Ninja Turtles", "The Fresh Prince of Bel-Air", "Home Improvement" and "Melrose Place". Meanwhile, gamers are playing titles such as "Syndicate", "Gunstar Heroes", "Myst" and "Doom". Children and teenagers are currently watching television shows such as "Are You Afraid of the Dark?", "The Ren & Stimpy Show", "Rugrats" and "Batman: The Animated Series".

Who was the Prime Minister of the United Kingdom on March 12th, 1994?

Enter your date of birth below to find out how old you were on March 12th, 1994.

Looking for some nostalgia? Here are some Youtube videos relating to March 12th, 1994. Please note that videos are automatically selected by Youtube and that results may vary! Click on the "Load Next Video" button to view the next video in the search playlist. In many cases, you'll find episodes of old TV shows, documentaries, music videos and soap dramas.