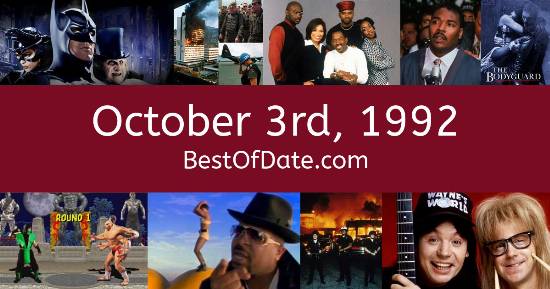 Songs that were on top of the music singles charts in the USA and the United Kingdom on October 3rd, 1992:

The date is October 3rd, 1992 and it's a Saturday. Anyone born today will have the star sign Libra. Currently, people are enjoying their weekend.

In Europe, a war is continuing to rage on in Bosnia and Herzegovina. A new cable television network called "Cartoon Network" has just been launched. In the United States, the campaign for the 1992 presidential election is in full swing, with Democratic Party nominee Bill Clinton taking on Republican incumbent George H. W. Bush.

Meanwhile, a sports comedy film called "The Mighty Ducks" has just been released in movie theaters. The movie, which stars Emilio Estevez and Joshua Jackson, is about a youth league hockey team and their new coach. Irish singer Sinead O'Connor has recently sparked controversy by tearing up a photograph of The Pope on Saturday Night Live. O'Connor's actions were in protest against the sexual abuse of children in the Catholic Church. People are watching popular TV shows such as "Teenage Mutant Ninja Turtles", "Roseanne", "The Fresh Prince of Bel-Air" and "Batman: The Animated Series".

Meanwhile, gamers are playing titles such as "The Legend of Zelda: A Link to the Past", "Super Castlevania IV", "Street Fighter II: The World Warrior" and "Super Mario Kart". Kids and teenagers are watching TV shows such as "Noozles", "The Fresh Prince of Bel-Air", "Are You Afraid of the Dark?" and "Clarissa Explains It All". Popular toys include the likes of "Easy-Bake Oven", "Micro Machines", "Yo-yo" and "Mighty Max".

Who was the Prime Minister of the United Kingdom on October 3rd, 1992?

Enter your date of birth below to find out how old you were on October 3rd, 1992.

Looking for some nostalgia? Here are some Youtube videos relating to October 3rd, 1992. Please note that videos are automatically selected by Youtube and that results may vary! Click on the "Load Next Video" button to view the next video in the search playlist. In many cases, you'll find episodes of old TV shows, documentaries, music videos and soap dramas.

Here are some fun statistics about October 3rd, 1992.