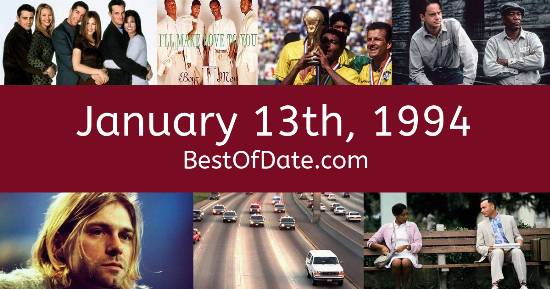 Songs that were on top of the music singles charts in the USA and the United Kingdom on January 13th, 1994.

The date is January 13th, 1994 and it's a Thursday. Anyone born today will have the star sign Capricorn. The Christmas holiday season is long over, the decorations have been taken down and a sense of normality has returned.

In America, the song Hero by Mariah Carey is on top of the singles charts. Over in the UK, Twist And Shout by Chaka Demus & Pliers is the number one hit song. Bill Clinton is currently the President of the United States and the movie Mrs. Doubtfire is at the top of the Box Office.

In the United Kingdom, John Major is the current Prime Minister. In Europe, a war is continuing to rage on in Bosnia and Herzegovina. Meanwhile, in technology news, a relatively new storage format called the CD is beginning to outpace the regular cassette tape in music sales. The disc-based format gives listeners the ability to skip between songs instead of having to manually rewind and forward.

In fashion, "grunge" clothing has declined in popularity and women are beginning to wear form-fitting outfits such as slip dresses and pencil skirts. Movies such as Clueless and The Craft have popularized the "sexy school girl" look. It's 1994, so radio stations are being dominated by the likes of All-4-One, Boyz II Men, R. Kelly, Céline Dion, Bruce Springsteen, Bryan Adams, Meat Loaf, Bon Jovi, Wet Wet Wet, Rednex and Mariah Carey. Former NWA member Dr. Dre is currently in the news for all of the wrong reasons after he recently lead police on a high speed pursuit through Beverly Hills in his Ferrari. The "Death Row Records" rap star, who was arrested after the incident, is believed to have been over the legal alcohol limit.

People are currently shocked by the news that Tonya Harding's ex-husband and her bodyguard have been arrested on suspicion of carrying out an attack on rival figure skater Nancy Kerrigan. The attack, which recently took place at the Cobo Arena in Detroit, has been receiving widespread media attention. On TV, people are watching popular shows such as "Last of the Summer Wine", "Beverly Hills, 90210", "Clarissa Explains It All" and "Rugrats". Meanwhile, gamers are playing titles such as "FIFA International Soccer", "Shinobi III: Return of the Ninja Master", "Gunstar Heroes" and "Doom".

Kids and teenagers are watching TV shows such as "Dinosaurs", "Doug", "Taz-Mania" and "Tales from the Cryptkeeper". If you're a kid or a teenager, then you're probably playing with toys such as the Easy-Bake Oven, Yo-yo, Littlest Pet Shop and Mighty Max.

If you are looking for some childhood nostalgia, then check out January 13th, 2000 instead.

Bill Clinton was the President of the United States on January 13th, 1994.

John Major was the Prime Minister of the United Kingdom on January 13th, 1994.

Enter your date of birth below to find out how old you were on January 13th, 1994.

Here are some fun statistics about January 13th, 1994.