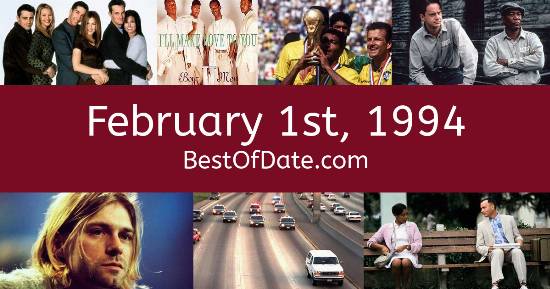 Songs that were on top of the music singles charts in the USA and the United Kingdom on February 1st, 1994.

The date is February 1st, 1994, and it's a Tuesday. Anyone born today will have the star sign Aquarius. In America, the song All For Love by Bryan Adams, Rod Stewart & Sting is on top of the singles charts.

Over in the UK, Things Can Only Get Better by D:ream is the number one hit song. Bill Clinton is currently the President of the United States, and the movie Mrs. Doubtfire is at the top of the Box Office. In the United Kingdom, John Major is the current Prime Minister.

In Europe, a war is continuing to rage on in Bosnia and Herzegovina. Meanwhile, in technology news, a relatively new storage format called the CD is beginning to outpace the regular cassette tape in music sales. The disc-based format gives listeners the ability to skip between songs instead of having to manually rewind and forward. A new form of communication called "text messaging" is continuing to grow in popularity. However, it can only be done if both the sender and the receiver are on the same cell network.

A former student has fired blank shots from a starting pistol at Prince Charles during his royal tour in Sydney, Australia. The incident occurred while Charles was handing out awards at a ceremony on Australia Day. In soccer, Liverpool manager Graeme Souness has resigned following a recent defeat against Bristol City in the FA Cup. He has been replaced by Roy Evans. In American Football, the Dallas Cowboys have won Super Bowl XXVIII after beating the Buffalo Bills 30-13 at the Georgia Dome in Atlanta. This is the Buffalo Bills fourth consecutive defeat in the Super Bowl.

In music, rock band Green Day have just released their new album "Dookie". The album contains songs such as "Longview" and "Basket Case". If you were to travel back to this day, notable figures such as Bill Hicks, John Candy, Kurt Cobain and Richard Nixon would all be still alive. On TV, people are watching popular shows such as "Roseanne", "Home Improvement", "Step by Step" and "Walker, Texas Ranger".

Meanwhile, gamers are playing titles such as "Mortal Kombat", "Shinobi III: Return of the Ninja Master", "Doom" and "Jungle Strike". Kids and teenagers are watching TV shows such as "Rugrats", "Batman: The Animated Series", "Bill Nye the Science Guy" and "Animaniacs". If you're a kid or a teenager, then you're probably playing with toys such as Sylvanian Families, the Game Boy, Polly Pocket and the Super Nintendo Entertainment System (SNES).

These are trending news stories and fads that were prevalent at this time. These are topics that would have been in the media on February 1st, 1994.

News stories, pop culture trends, and other events that happened around February 1st, 1994.

Check out our personality summary for people who were born on February 1st, 1994.

If you are looking for some childhood nostalgia, then you should check out February 1st, 2000, instead.

Celebrities, historical figures, and other notable people who were born on February 1st.

Bill Clinton was the President of the United States on February 1st, 1994.

Find out what your age was on February 1st, 1994, by entering your DOB below.
This information is not saved on our server.

Here are some fun statistics about February 1st, 1994.