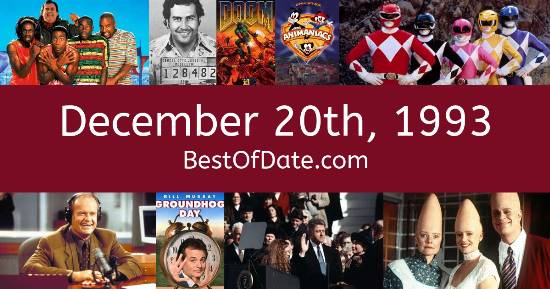 Songs that were on top of the music singles charts in the USA and the United Kingdom on December 20th, 1993.

The date is December 20th, 1993 and it's a Monday. Anyone born today will have the star sign Sagittarius. Christmas Day of 1993 is fast approaching and the excitement is building. Department stores are thronged with Christmas shoppers.

In America, the song Again by Janet Jackson is on top of the singles charts. Over in the UK, Babe by Take That is the number one hit song. Bill Clinton is currently the President of the United States and the movie Wayne's World 2 is at the top of the Box Office.

It's 1993, so radio stations are being dominated by the likes of Meat Loaf, UB40, Snow, Haddaway, Whitney Houston, Take That, Janet Jackson and Mariah Carey. A new first-person shooter game called "Doom" has recently been released by id Software. Steven Spielberg's historical drama film "Schindler's List" has just been released in movie theaters. Meanwhile, the films "In the Name of the Father" and "Sister Act 2: Back in the Habit" have also recently made their big screen debuts.

If you were to travel back to this day, notable figures such as Bill Hicks, John Candy, Kurt Cobain and Richard Nixon would all be still alive. On TV, people are watching popular shows such as "Sherlock Holmes", "Married... with Children", "One Foot in the Grave" and "Home Improvement". Meanwhile, gamers are playing titles such as "Street Fighter II: The World Warrior", "Super Star Wars", "FIFA International Soccer" and "Jungle Strike".

Kids and teenagers are watching TV shows such as "Art Attack", "Rosie and Jim", "Are You Afraid of the Dark?" and "Clarissa Explains It All". Popular toys at the moment include the likes of Cabbage Patch Kids, Pogo ball / Lolo ball, Polly Pocket and Mighty Max.

If you are looking for some childhood nostalgia, then check out December 20th, 1999 instead.

Chinese actor.
Born on December 20th, 1998
He was born exactly 5 years after this date.

Bill Clinton was the President of the United States on December 20th, 1993.

John Major was the Prime Minister of the United Kingdom on December 20th, 1993.

Enter your date of birth below to find out how old you were on December 20th, 1993.

Here are some fun statistics about December 20th, 1993.