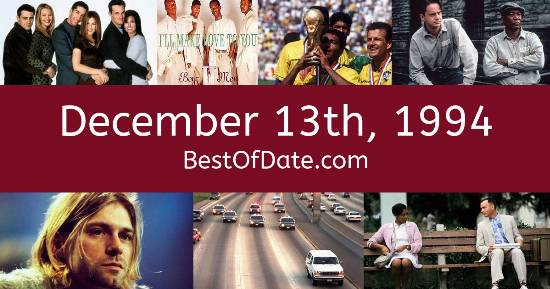 Songs that were on top of the music singles charts in the USA and the United Kingdom on December 13th, 1994.

The date is December 13th, 1994 and it's a Tuesday. Anyone born today will have the star sign Sagittarius. The Christmas season of 1994 is in full swing. The decorations are up and festive songs are playing on the radio.

In America, the song On Bended Knee by Boyz II Men is on top of the singles charts. Over in the UK, Stay Another Day by East 17 is the number one hit song. Bill Clinton is currently the President of the United States and the movie Disclosure is at the top of the Box Office.

It's 1994, so radio stations are being dominated by the likes of All-4-One, Boyz II Men, R. Kelly, Céline Dion, Bruce Springsteen, Bryan Adams, Meat Loaf, Bon Jovi, Wet Wet Wet, Rednex and Mariah Carey. In Europe, a war is continuing to rage on in Bosnia and Herzegovina. Christmas films such as "Junior", "The Santa Clause" and "Miracle on 34th Street" are currently being shown in movie theaters.

A war has recently broken out in Chechnya. Russian forces have now invaded the country in order to quash a rebellion by the Chechen Republic of Ichkeria. In the United Kingdom, suspected English serial killer Fred West has been charged with 12 counts of murder. On TV, people are watching popular shows such as "Full House", "One Foot in the Grave", "Babylon 5" and "Touched by an Angel".

Meanwhile, gamers are playing titles such as "Gunstar Heroes", "Super Metroid", "Earthworm Jim" and "Warcraft: Orcs & Humans". Kids and teenagers are watching TV shows such as "Married... with Children", "Fireman Sam", "Blossom" and "The Magic School Bus". If you're a kid or a teenager, then you're probably playing with toys such as Sylvanian Families, Polly Pocket, G.I. Joe (figures) and Nerf Blaster.

If you are looking for some childhood nostalgia, then check out December 13th, 2000 instead.

Celebrities, historical figures and notable people who were born on the 13th of December.

Bill Clinton was the President of the United States on December 13th, 1994.

John Major was the Prime Minister of the United Kingdom on December 13th, 1994.

Enter your date of birth below to find out how old you were on December 13th, 1994.

Here are some fun statistics about December 13th, 1994.