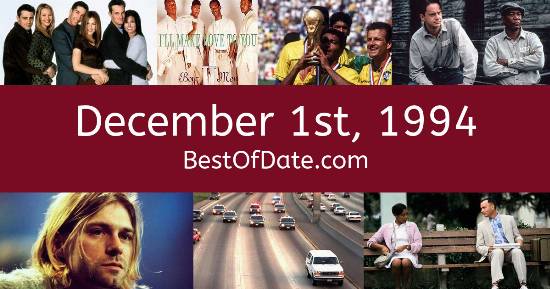 Songs that were on top of the music singles charts in the USA and the United Kingdom on December 1st, 1994.

The movie "Star Trek: Generations" was at the top of the box office on December 1st, 1994.

The date is December 1st, 1994 and it's a Thursday. Anyone born today will have the star sign Sagittarius. The Christmas season of 1994 has began.

In America, the song I'll Make Love To You by Boyz II Men is on top of the singles charts. Over in the UK, Let Me Be Your Fantasy by Baby D. is the number one hit song. Bill Clinton is currently the President of the United States and the movie Star Trek: Generations is at the top of the Box Office.

In Europe, a war is continuing to rage on in Bosnia and Herzegovina. In Finland, voters have rejected the chance to join the European Union. In the United States, serial killer Jeffrey Dahmer has been beaten to death in prison. Meanwhile, in music news, Irish boyband "Boyzone" have released their new single "Love Me for a Reason". Rap star Tupac Shakur is currently recovering from his injuries after he was robbed and shot five times in the lobby of Quad Recording Studios in Manhattan.

In celebrity news, actor Richard Gere and supermodel Cindy Crawford have announced they are separating after four years of marriage. If you were to travel back to this day, notable figures such as Eazy E, Selena, Bob Ross and Jerry Garcia would all be still alive. On TV, people are watching popular shows such as "Last of the Summer Wine", "Murder, She Wrote", "Matlock" and "Star Trek: Deep Space Nine".

Meanwhile, gamers are playing titles such as "Tiny Toon Adventures 2: Trouble in Wackyland", "Mortal Kombat II", "Shinobi III: Return of the Ninja Master" and "Super Street Fighter II". Kids and teenagers are watching TV shows such as "Roseanne", "Mr. Bean", "The Adventures of Pete & Pete" and "Rugrats". Popular toys at the moment include the likes of the Easy-Bake Oven, Cabbage Patch Kids, Sylvanian Families and G.I. Joe (figures).

If you are looking for some childhood nostalgia, then check out December 1st, 2000 instead.

Colombian drug lord. Deceased
Born on December 1st, 1949
He was not alive on this date.

Bill Clinton was the President of the United States on December 1st, 1994.

John Major was the Prime Minister of the United Kingdom on December 1st, 1994.

Enter your date of birth below to find out how old you were on December 1st, 1994.

Here are some fun statistics about December 1st, 1994.

Have something to say about December 1st, 1994?