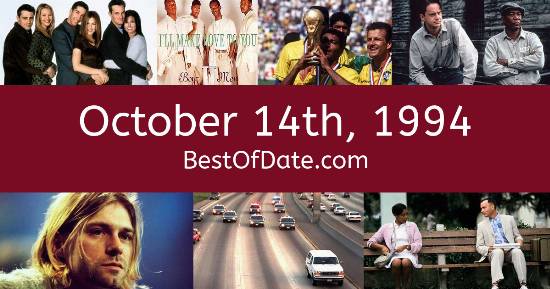 Songs that were on top of the music singles charts in the USA and the United Kingdom on October 14th, 1994.

The date is October 14th, 1994 and it's a Friday. Anyone born today will have the star sign Libra. Currently, people have "that Friday feeling" and are looking forward to the weekend.

The summer is long gone. Temperatures have started to become much cooler and the evenings are beginning to get darker. Fallen leaves have carpeted driveways, lawns, pathways and sidewalks and there's a fresh earthy scent in the ear. In America, the song I'll Make Love To You by Boyz II Men is on top of the singles charts.

Over in the UK, Saturday Night by Whigfield is the number one hit song. Bill Clinton is currently the President of the United States and the movie The Specialist is at the top of the Box Office. In the United Kingdom, John Major is the current Prime Minister.

A new Internet web browser called Netscape has just been released. Quentin Tarantino's film "Pulp Fiction", starring John Travolta and Uma Thurman, has been released in movie theaters. If you were to travel back to this day, notable figures such as Raul Julia, Eazy E, Selena and Bob Ross would all be still alive.

On TV, people are watching popular shows such as "Teenage Mutant Ninja Turtles", "Hangin' with Mr. Cooper", "Touched by an Angel" and "The Secret World of Alex Mack". Meanwhile, gamers are playing titles such as "Shinobi III: Return of the Ninja Master", "NBA Jam", "Doom" and "Super Metroid". Kids and teenagers are watching TV shows such as "Fireman Sam", "Beverly Hills, 90210", "Home Improvement" and "Bill Nye the Science Guy".

If you're a kid or a teenager, then you're probably playing with toys such as Micro Machines, Jenga, Mighty Max and Action Man.

If you are looking for some childhood nostalgia, then check out October 14th, 2000 instead.

Actress.
Born on October 14th, 2001
She was born exactly 7 years after this date.

Bill Clinton was the President of the United States on October 14th, 1994.

John Major was the Prime Minister of the United Kingdom on October 14th, 1994.

Enter your date of birth below to find out how old you were on October 14th, 1994.

Here are some fun statistics about October 14th, 1994.