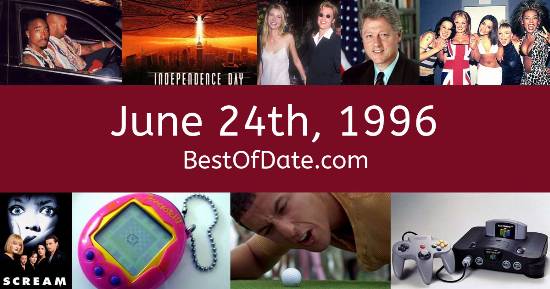 Songs that were on top of the music singles charts in the USA and the United Kingdom on June 24th, 1996:

The date is June 24th, 1996 and it's a Monday. Anyone born today will have the star sign Cancer. It's summer, so the temperatures are warmer and the evenings are longer than usual.

In America, the song Tha Crossroads by Bone Thugs-N-Harmony is on top of the singles charts. Over in the UK, Killing Me Softly by Fugees is the number one hit song. Bill Clinton is currently the President of the United States and the movie Eraser is at the top of the Box Office.

Everyone and their grandmother is buying a new "virtual pet" called the Tamagotchi. On TV, people are watching popular shows such as "Hangin' with Mr. Cooper", "Babylon 5", "Ellen" and "3rd Rock from the Sun". Meanwhile, gamers are playing titles such as "Command & Conquer", "Rayman", "Duke Nukem 3D" and "Quake".

Children and teenagers are currently watching television shows such as "Living Single", "All That", "The Magic School Bus" and "Hang Time". If you're a kid or a teenager, then you're probably playing with toys such as "Jenga", "Yo-yo", "Super Soaker (water gun)" and "Action Man".

Celebrities, historical figures and noteable people who were born on the 24th of June:

National holidays and famous events that fall on the 24th of June:

Who was the Prime Minister of the United Kingdom on June 24th, 1996?

Looking for some nostalgia? Here are some Youtube videos relating to June 24th, 1996. Please note that videos are automatically selected by Youtube and that results may vary! Click on the "Load Next Video" button to view the next video in the search playlist. In many cases, you'll find episodes of old TV shows, documentaries, music videos and soap dramas.