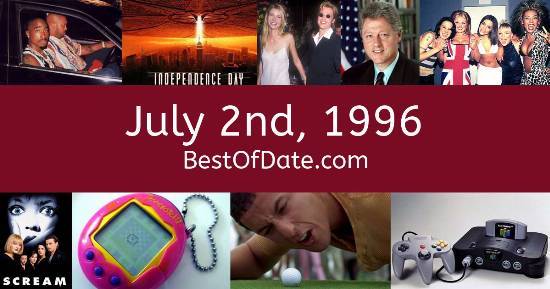 July 2nd, 1996 relates to an event in a movie, book, game or television series:

Songs that were on top of the music singles charts in the USA and the United Kingdom on July 2nd, 1996:

The date is July 2nd, 1996 and it's a Tuesday. Anyone born today will have the star sign Cancer. In America, the July 4th celebrations are fast approaching.

It's summer, so the temperatures are warmer and the evenings are longer than usual. In America, the song Tha Crossroads by Bone Thugs-N-Harmony is on top of the singles charts. Over in the UK, Three Lions by Baddiel & Skinner & Lightning Seeds is the number one hit song.

Bill Clinton is currently the President of the United States and the movie Nutty Professor is at the top of the Box Office. In the United Kingdom, John Major is the current Prime Minister. In fashion, "grunge" clothing has declined in popularity and women are beginning to wear form-fitting outfits such as slip dresses and pencil skirts. Movies such as Clueless and The Craft have popularized the "sexy school girl" look.

It's 1996, so radio stations are being dominated by the likes of Mariah Carey, Boyz II Men, Céline Dion, Oasis, Mark Morrison, Spice Girls, Los Del Rio, 2Pac and Coolio. Everyone and their grandmother is buying a new "virtual pet" called the Tamagotchi. On TV, people are watching popular shows such as "Roseanne", "The Secret World of Alex Mack", "Gargoyles" and "Father Ted".

Celebrities, historical figures and noteable people who were born on the 2nd of July:

Who was the Prime Minister of the United Kingdom on July 2nd, 1996?

Enter your date of birth below to find out how old you were on July 2nd, 1996.

Looking for some nostalgia? Here are some Youtube videos relating to July 2nd, 1996. Please note that videos are automatically selected by Youtube and that results may vary! Click on the "Load Next Video" button to view the next video in the search playlist. In many cases, you'll find episodes of old TV shows, documentaries, music videos and soap dramas.

Here are some fun statistics about July 2nd, 1996.