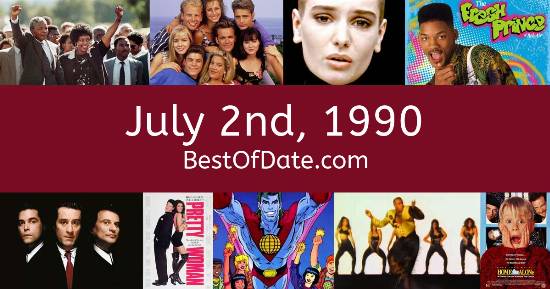 Songs that were on top of the music singles charts in the USA and the United Kingdom on July 2nd, 1990.

The date is July 2nd, 1990, and it's a Monday. Anyone born today will have the star sign Cancer. In America, the July 4th celebrations are fast approaching.

In Europe, West Germany and East Germany have officially merged their economies. Rapper Vanilla Ice has just released his song "Ice Ice Baby". If you were to travel back to this day, notable figures such as Stevie Ray Vaughan, Roald Dahl, John Bardeen and Miles Davis would all be still alive.

On TV, people are watching popular shows such as "The Cosby Show", "Murder, She Wrote", "Full House" and "The Wonder Years". Meanwhile, gamers are playing titles such as "Duck Hunt", "Herzog Zwei", "World Cup Italia '90" and "Phantasy Star II". Children and teenagers are currently watching television shows such as "Danger Mouse", "Adventures of the Little Koala", "Beetlejuice" and "Doogie Howser, M.D.".

If you're a kid or a teenager, then you're probably playing with toys such as the Nintendo Entertainment System, Koosh Ball, Teenage Mutant Hero Turtles figures and the Sega Genesis / Mega Drive.

These are trending news stories and fads that were prevalent at this time. These are topics that would have been in the media on July 2nd, 1990.

Check out our personality summary for people who were born on July 2nd, 1990.

If you are looking for some childhood nostalgia, then you should check out July 2nd, 1996, instead.

Celebrities, historical figures, and other notable people who were born on July 2nd.

George W. Bush Snr. was the President of the United States on July 2nd, 1990.

Enter your date of birth below to find out how old you were on July 2nd, 1990.
This information is not transmitted to our server.

Here are some fun statistics about July 2nd, 1990.