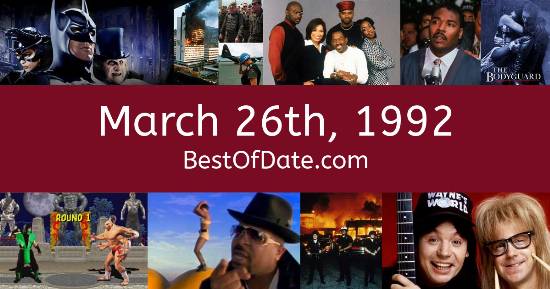 On March 26th, 1992, the following songs were at the top of the music charts in the USA and the UK.

The date is March 26th, 1992, and it's a Thursday. Anyone born today will have the star sign Aries. Spring has arrived and the days have become longer.

If you were to travel back to this day, notable figures such as Robert Reed, Anthony Perkins, Audrey Hepburn and Thurgood Marshall would all be still alive. On TV, people are watching popular shows such as "Last of the Summer Wine", "Star Trek: The Next Generation", "Roseanne" and "Step by Step". Meanwhile, gamers are playing titles such as "Paperboy", "The Simpsons: Bart vs. the Space Mutants", "Streets of Rage" and "The Legend of Zelda: A Link to the Past".

Kids and teenagers are watching TV shows such as "Pingu", "Adventures of the Little Koala", "Dink, the Little Dinosaur" and "Doogie Howser, M.D.". If you're a kid or a teenager, then you're probably playing with toys such as the Easy-Bake Oven, Screwball Scramble, Pogo ball / Lolo ball and Jenga.

These are trending news stories and fads that were prevalent at this time. These are topics that would have been in the media on March 26th, 1992.

Check out our personality summary for people who were born on March 26th, 1992.

If you are looking for some childhood nostalgia, then you should check out March 26th, 1998 instead.

John Major was the Prime Minister of the United Kingdom on March 26th, 1992.

Enter your date of birth below to find out how old you were on March 26th, 1992.
This information is not transmitted to our server.