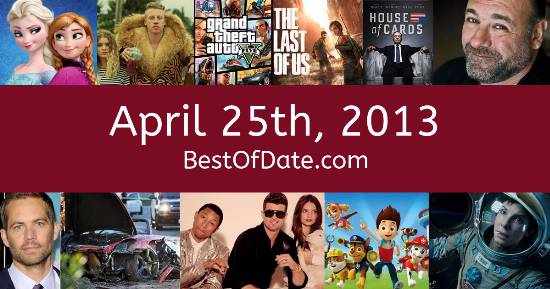 Songs that were on top of the music singles charts in the USA and the United Kingdom on April 25th, 2013.

The date is April 25th, 2013 and it's a Thursday. Anyone born today will have the star sign Taurus. The summer of 2013 is drawing closer and temperatures have started to rise.

In America, the song Just Give Me A Reason by Pink ft Nate Ruess is on top of the singles charts. Over in the UK, Get Lucky by Daft Punk is the number one hit song. Barack Obama is currently the President of the United States and the movie Oblivion is at the top of the Box Office.

In soccer, Liverpool striker Luis Suarez has sparked controversy by biting Chelsea defender Branislav Ivanovic. Meanwhile, Manchester United have been crowned as Premier League champions after defeating Aston Villa 3-0 at Old Trafford. 1,134 people have tragically lost their lives following the collapse of an eight-story garment factory in Dhaka, Bangladesh. If you were to travel back to this day, notable figures such as James Gandolfini, Cory Monteith, Gia Allemand and Lisa Robin Kelly would all be still alive.

If you are looking for some childhood nostalgia, then check out April 25th, 2019 instead.

Barack Obama was the President of the United States on April 25th, 2013.

David Cameron was the Prime Minister of the United Kingdom on April 25th, 2013.

Enter your date of birth below to find out how old you were on April 25th, 2013.