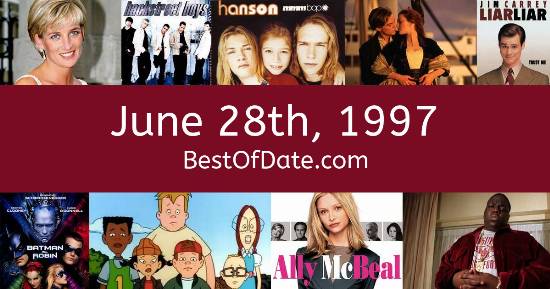 On June 28th, 1997, the following songs were at the top of the music charts in the USA and the UK.

The top "Box Office" movie on this date was the film "Face/Off".

The bitefight from that night is something that I will always remember and is easily in the top 25 most shocking sports moments.
Posted on May 25th, 2022 01:19

I was very young when this happened. However, I still remember everyone talking about Tyson's ear bite at school the next Monday.
Posted on May 25th, 2022 16:50

The remains of an unidentified Long Island serial killer victim, nicknamed "Peaches", were discovered at Hampstead Park on this date. It's interesting to know that Tyson's famous "bite" fight was on that night.
Posted on May 26th, 2022 18:40

The date is June 28th, 1997, and it's a Saturday. Anyone born today will have the star sign Cancer. Currently, people are enjoying their weekend.

It's summer, so the temperatures are warmer and the evenings are longer than usual. The song I'll Be Missing You by Puff Daddy & Faith Evans is on top of the singles charts in both the USA and the United Kingdom. Bill Clinton is currently the President of the United States, and the movie Face/Off is at the top of the Box Office.

If you were to travel back to this day, notable figures such as Gianni Versace, Princess Diana, Mother Teresa and John Denver would all be still alive. On TV, people are watching popular shows such as "Step by Step", "Walker, Texas Ranger", "The Nanny" and "7th Heaven". Meanwhile, gamers are playing titles such as "Duke Nukem 3D", "The Elder Scrolls II: Daggerfall", "Tomb Raider" and "Diablo".

Children and teenagers are currently watching television shows such as "All That", "Hang Time", "Blue's Clues" and "Daria". If you're a kid or a teenager, then you're probably playing with toys such as Yo-yo, Littlest Pet Shop, Fisher-Price Great Adventures Castle and the Sega Saturn.

These are trending news stories and fads that were prevalent at this time. These are topics that would have been in the media on June 28th, 1997.

Check out our personality summary for people who were born on June 28th, 1997.

If you are looking for some childhood nostalgia, then you should check out June 28th, 2003 instead.

Bill Clinton was the President of the United States on June 28th, 1997.

Tony Blair was the Prime Minister of the United Kingdom on June 28th, 1997.

Enter your date of birth below to find out how old you were on June 28th, 1997.
This information is not transmitted to our server.