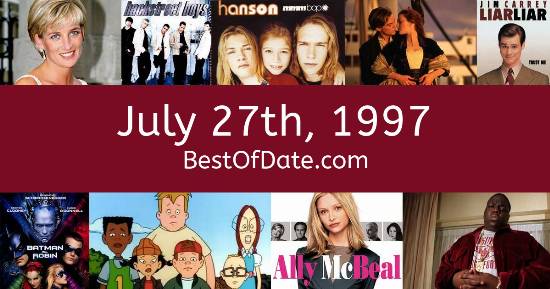 On July 27th, 1997, the following songs were at the top of the music charts in the USA and the UK.

The top "Box Office" movie on this date was the film "Men in Black".

The following comments about July 27th, 1997 were written by our visitors.

The original Stargate SG-1 series was one of my favorite childhood shows. It was on every Thursday night in my country.
Posted on July 27th, 2022 00:31

The date is July 27th, 1997, and it's a Sunday. Anyone born today will have the star sign Leo. Currently, people are enjoying their weekend.

It's summer, so the temperatures are warmer and the evenings are longer than usual. The song I'll Be Missing You by Puff Daddy & Faith Evans is on top of the singles charts in both the USA and the United Kingdom. Bill Clinton is currently the President of the United States, and the movie Men in Black is at the top of the Box Office.

If you were to travel back to this day, notable figures such as Princess Diana, Mother Teresa, John Denver and Chris Farley would all be still alive. On TV, people are watching popular shows such as "Mad About You", "Star Trek: Voyager", "Hercules: The Legendary Journeys" and "Buffy the Vampire Slayer". Meanwhile, gamers are playing titles such as "Virtua Fighter 2", "Blood Omen: Legacy of Kain", "Diablo" and "Star Wars: Shadows of the Empire".

Kids and teenagers are watching TV shows such as "Rugrats", "Home Improvement", "Sweet Valley High" and "Arthur". If you're a kid or a teenager, then you're probably playing with toys such as Lego Pirates, Yo-yo, Super Soaker (water gun) and the Sega Saturn.

These are trending news stories and fads that were prevalent at this time. These are topics that would have been in the media on July 27th, 1997.

News stories and other events that happened around July 27th, 1997.

Check out our personality summary for people who were born on July 27th, 1997.

Television shows that people were watching in July, 1997.

Popular video games that people were playing in July of 1997.

If you are looking for some childhood nostalgia, then you should check out July 27th, 2003 instead.

Bill Clinton was the President of the United States on July 27th, 1997.

Tony Blair was the Prime Minister of the United Kingdom on July 27th, 1997.

Find out what your age was on July 27th, 1997, by entering your DOB below.
This information is not saved on our server.