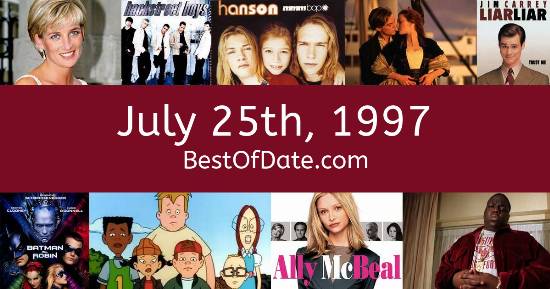 Songs that were on top of the music singles charts in the USA and the United Kingdom on July 25th, 1997.

The date is July 25th, 1997 and it's a Friday. Anyone born today will have the star sign Leo. Currently, people have "that Friday feeling" and are looking forward to the weekend.

It's summer, so the temperatures are warmer and the evenings are longer than usual. The song I'll Be Missing You by Puff Daddy & Faith Evans is on top of the singles charts in both the USA and the United Kingdom. Bill Clinton is currently the President of the United States and the movie Men in Black is at the top of the Box Office.

If you were to travel back to this day, notable figures such as Princess Diana, Mother Teresa, John Denver and Chris Farley would all be still alive. On TV, people are watching popular shows such as "Step by Step", "Babylon 5", "Touched by an Angel" and "Xena: Warrior Princess". Meanwhile, gamers are playing titles such as "Virtua Fighter 2", "Crash Bandicoot", "Command & Conquer: Red Alert" and "Harvest Moon".

Kids and teenagers are watching TV shows such as "Weird Science", "Little Bear", "Superman: The Animated Series" and "Blue's Clues". If you're a kid or a teenager, then you're probably playing with toys such as Jenga, Lego Pirates, Styrofoam plane gliders and Bop It.

If you are looking for some childhood nostalgia, then check out July 25th, 2003 instead.

Bill Clinton was the President of the United States on July 25th, 1997.

Tony Blair was the Prime Minister of the United Kingdom on July 25th, 1997.