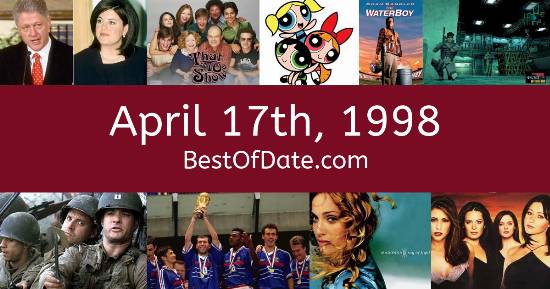 Songs that were on top of the music singles charts in the USA and the United Kingdom on April 17th, 1998.

The date is April 17th, 1998 and it's a Friday. Anyone born today will have the star sign Aries. Currently, people have "that Friday feeling" and are looking forward to the weekend.

Bill Clinton is currently the President of the United States and the movie City of Angels is at the top of the Box Office. In the United Kingdom, Tony Blair is the current Prime Minister. Meanwhile, in technology news, CDs have become the dominant format for music. People are buying CD players and the portable CD players such as the "Discman". As a result, the older cassette tape format is continuing to decline in sales.

On TV, people are watching popular shows such as "Babylon 5", "Sabrina, the Teenage Witch", "Recess" and "Ally McBeal". Meanwhile, gamers are playing titles such as "Fallout", "Grand Theft Auto", "Resident Evil 2" and "1080° Snowboarding". Kids and teenagers are watching TV shows such as "Goosebumps", "Moesha", "City Guys" and "Bear in the Big Blue House".

Popular toys at the moment include the likes of Polly Pocket, the Tamagotchi, the Nintendo 64 and the Pokémon Trading Card Game.

If you are looking for some childhood nostalgia, then check out April 17th, 2004 instead.

Celebrities, historical figures and notable people who were born on the 17th of April.

Bill Clinton was the President of the United States on April 17th, 1998.

Tony Blair was the Prime Minister of the United Kingdom on April 17th, 1998.

Enter your date of birth below to find out how old you were on April 17th, 1998.