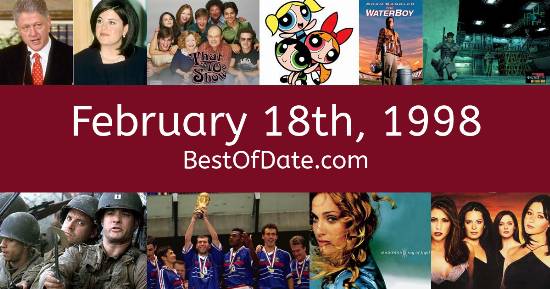 Songs that were on top of the music singles charts in the USA and the United Kingdom on February 18th, 1998.

The date is February 18th, 1998 and it's a Wednesday. Anyone born today will have the star sign Aquarius. Valentine's Day of 1998 has just passed.

In America, the song Nice And Slow by Usher is on top of the singles charts. Over in the UK, My Heart Will Go On by Celine Dion is the number one hit song. Bill Clinton is currently the President of the United States and the movie Titanic is at the top of the Box Office.

In Ireland, 19-year-old Fiona Sinnott has gone missing in Broadway, Co. Wexford. If you were to travel back to this day, notable figures such as Rob Pilatus, Frank Sinatra, Phil Hartman and Big L would all be still alive. On TV, people are watching popular shows such as "Beverly Hills, 90210", "Home Improvement", "The X-Files" and "Pinky and the Brain".

Meanwhile, gamers are playing titles such as "Super Mario 64", "War Gods", "Star Wars: Shadows of the Empire" and "Crash Bandicoot 2: Cortex Strikes Back". Children and teenagers are currently watching television shows such as "In the House", "Pinky and the Brain", "Kenan & Kel" and "Teen Angel". Popular toys at the moment include the likes of Polly Pocket, Lego Pirates, the Tamagotchi and the Nintendo 64.

If you are looking for some childhood nostalgia, then check out February 18th, 2004 instead.

Bill Clinton was the President of the United States on February 18th, 1998.

Tony Blair was the Prime Minister of the United Kingdom on February 18th, 1998.

Enter your date of birth below to find out how old you were on February 18th, 1998.

Here are some fun statistics about February 18th, 1998.