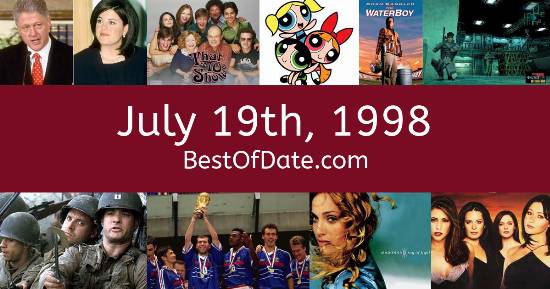 These songs were on top of the music charts in the United States and the United Kingdom on July 19th, 1998.

The movie "Mask of Zorro" was at the top of the Box Office on this day.

The date is July 19th, 1998, and it's a Sunday. Anyone born today will have the star sign Cancer. Currently, people are enjoying their weekend.

It's summer, so the temperatures are warmer and the evenings are longer than usual. In America, the song The Boy Is Mine by Brandy & Monica is on top of the singles charts. Over in the UK, Freak Me by Another Level is the number one hit song.

Bill Clinton is currently the President of the United States, and the movie Mask of Zorro is at the top of the Box Office. In the United Kingdom, Tony Blair is the current Prime Minister. A new form of communication called "text messaging" is continuing to grow in popularity. However, it can only be done if both the sender and the receiver are on the same cell network.

The Clinton-Lewinsky sex scandal is receiving ongoing media attention. If you were to travel back to this day, notable figures such as Big L, Stanley Kubrick, Joe DiMaggio and Dana Plato would all be still alive. On TV, people are watching popular shows such as "Party of Five", "JAG", "Buffy the Vampire Slayer" and "Two Guys, a Girl and a Pizza Place".

Meanwhile, gamers are playing titles such as "PaRappa the Rapper", "Crash Bandicoot 2: Cortex Strikes Back", "Resident Evil 2" and "Gran Turismo". Kids and teenagers are watching TV shows such as "Art Attack", "All That", "Moesha" and "The Angry Beavers". Popular toys at the moment include the likes of Jenga, Lego Pirates, Super Soaker (water gun) and Dear Diary.

These are trending news stories and fads that were prevalent at this time. These are topics that would have been in the media on July 19th, 1998.

News stories and other events that happened around July 19th, 1998.

Check out our personality summary for people who were born on July 19th, 1998.

If you are looking for some childhood nostalgia, then you should check out July 19th, 2004 instead.

Bill Clinton was the President of the United States on July 19th, 1998.

Tony Blair was the Prime Minister of the United Kingdom on July 19th, 1998.

Find out what your age was on July 19th, 1998, by entering your DOB below.
This information is not saved on our server.