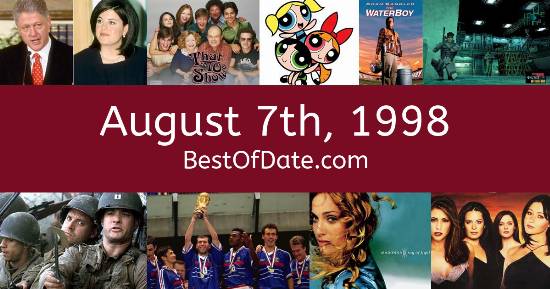 Songs that were on top of the music singles charts in the USA and the United Kingdom on August 7th, 1998.

The date is August 7th, 1998 and it's a Friday. Anyone born today will have the star sign Leo. Currently, people have "that Friday feeling" and are looking forward to the weekend.

It's summer, so the temperatures are warmer and the evenings are longer than usual. In America, the song The Boy Is Mine by Brandy & Monica is on top of the singles charts. Over in the UK, Viva Forever by Spice Girls is the number one hit song.

The Clinton-Lewinsky sex scandal is receiving ongoing media attention. A musical subgenre called "Nu metal" is beginning to take off, aided by the success of bands such as Korn. If you were to travel back to this day, notable figures such as Big L, Stanley Kubrick, Joe DiMaggio and Dana Plato would all be still alive.

On TV, people are watching popular shows such as "The Nanny", "Hercules: The Legendary Journeys", "Kenan & Kel" and "Sex and the City". Meanwhile, gamers are playing titles such as "GoldenEye 007", "Oddworld: Abe's Oddysee", "Fallout" and "StarCraft". Kids and teenagers are watching TV shows such as "Tales from the Cryptkeeper", "Sister, Sister", "The Angry Beavers" and "USA High".

Popular toys at the moment include the likes of Yo-yo, the PlayStation (PS1), the Tamagotchi and Spice Girls dolls.

If you are looking for some childhood nostalgia, then check out August 7th, 2004 instead.

Bill Clinton was the President of the United States on August 7th, 1998.

Tony Blair was the Prime Minister of the United Kingdom on August 7th, 1998.

Enter your date of birth below to find out how old you were on August 7th, 1998.

Here are some fun statistics about August 7th, 1998.