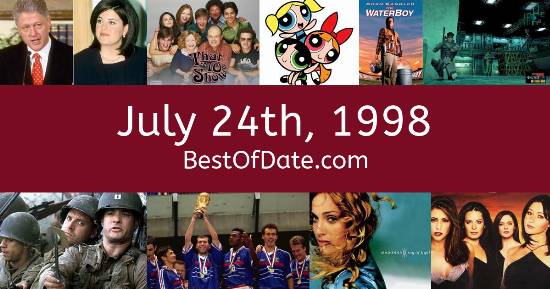 Songs that were on top of the music singles charts in the USA and the United Kingdom on July 24th, 1998.

The date is July 24th, 1998 and it's a Friday. Anyone born today will have the star sign Leo. Currently, people have "that Friday feeling" and are looking forward to the weekend.

The Clinton-Lewinsky sex scandal is receiving ongoing media attention. If you were to travel back to this day, notable figures such as Big L, Stanley Kubrick, Joe DiMaggio and Dana Plato would all be still alive. On TV, people are watching popular shows such as "Beverly Hills, 90210", "Walker, Texas Ranger", "7th Heaven" and "CatDog".

Meanwhile, gamers are playing titles such as "Super Mario 64", "GoldenEye 007", "Resident Evil 2" and "1080° Snowboarding". Children and teenagers are currently watching television shows such as "Beverly Hills, 90210", "Animaniacs", "All That" and "Bear in the Big Blue House". If you're a kid or a teenager, then you're probably playing with toys such as Jenga, the Tamagotchi, Bop It and Spice Girls dolls.

If you are looking for some childhood nostalgia, then check out July 24th, 2004 instead.

Bill Clinton was the President of the United States on July 24th, 1998.

Tony Blair was the Prime Minister of the United Kingdom on July 24th, 1998.