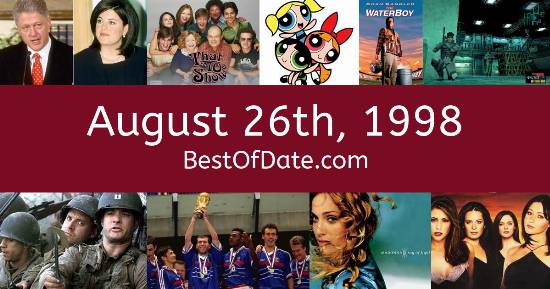 On August 26th, 1998, the following songs were at the top of the music charts in the USA and the UK.

The top "Box Office" movie on this date was the film "Saving Private Ryan".

The date is August 26th, 1998, and it's a Wednesday. Anyone born today will have the star sign Virgo. The summer of 1998 is coming to an end and fall is just around the corner.

In America, the song The Boy Is Mine by Brandy & Monica is on top of the singles charts. Over in the UK, No Matter What by Boyzone is the number one hit song. Bill Clinton is currently the President of the United States, and the movie Saving Private Ryan is at the top of the Box Office.

If you were to travel back to this day, notable figures such as Michelle Thomas, Big L, Stanley Kubrick and Joe DiMaggio would all be still alive. On TV, people are watching popular shows such as "Melrose Place", "Star Trek: Deep Space Nine", "Everybody Loves Raymond" and "Celebrity Deathmatch". Meanwhile, gamers are playing titles such as "Oddworld: Abe's Oddysee", "PaRappa the Rapper", "Tenchu: Stealth Assassins" and "1080° Snowboarding".

Children and teenagers are currently watching television shows such as "Round the Twist", "Kenan & Kel", "Mortal Kombat: Defenders of the Realm" and "USA High". Popular toys at the moment include the likes of Jenga, Super Soaker (water gun), Dear Diary and Bop It.

These are trending news stories and fads that were prevalent at this time. These are topics that would have been in the media on August 26th, 1998.

Check out our personality summary for people who were born on August 26th, 1998.

If you are looking for some childhood nostalgia, then you should check out August 26th, 2004, instead.

Celebrities, historical figures, and other notable people who were born on August 26th.

Bill Clinton was the President of the United States on August 26th, 1998.

Enter your date of birth below to find out how old you were on August 26th, 1998.
This information is not transmitted to our server.