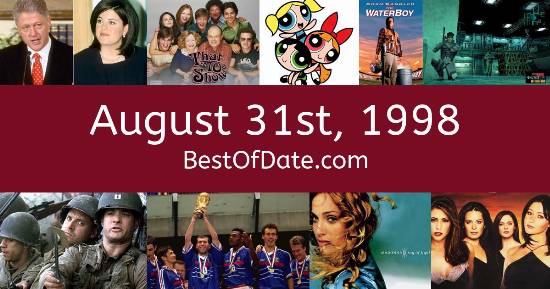 Songs that were on top of the music singles charts in the USA and the United Kingdom on August 31st, 1998.

The date is August 31st, 1998 and it's a Monday. Anyone born today will have the star sign Virgo. The summer of 1998 is coming to an end and fall is just around the corner.

In America, the song I Don't Want To Miss A Thing by Aerosmith is on top of the singles charts. Over in the UK, If You Tolerate This Your Children Will Be Next by Manic Street Preachers is the number one hit song. Bill Clinton is currently the President of the United States and the movie Blade is at the top of the Box Office.

If you were to travel back to this day, notable figures such as Big L, Stanley Kubrick, Joe DiMaggio and Dana Plato would all be still alive. On TV, people are watching popular shows such as "Baywatch", "Star Trek: Deep Space Nine", "Touched by an Angel" and "Dawson's Creek". Meanwhile, gamers are playing titles such as "Oddworld: Abe's Oddysee", "Crash Bandicoot 2: Cortex Strikes Back", "Resident Evil 2" and "1080° Snowboarding".

Children and teenagers are currently watching television shows such as "Doug", "Animaniacs", "Moesha" and "Sabrina the Teenage Witch". If you're a kid or a teenager, then you're probably playing with toys such as Polly Pocket, Dear Diary, the Tamagotchi and Spice Girls dolls.

If you are looking for some childhood nostalgia, then check out August 31st, 2004 instead.

National holidays and famous events that fall on the 31st of August.

Bill Clinton was the President of the United States on August 31st, 1998.

Tony Blair was the Prime Minister of the United Kingdom on August 31st, 1998.

Enter your date of birth below to find out how old you were on August 31st, 1998.