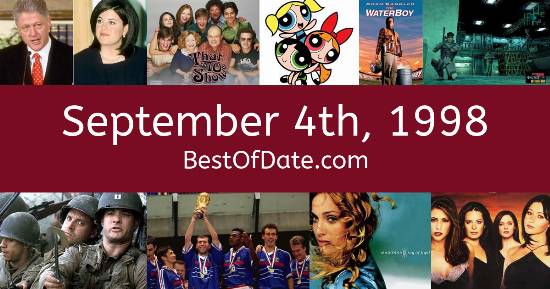 Songs that were on top of the music singles charts in the USA and the United Kingdom on September 4th, 1998.

The movie "Something About Mary" was at the top of the box office on September 4th, 1998.

The date is September 4th, 1998 and it's a Friday. Anyone born today will have the star sign Virgo. Currently, people have "that Friday feeling" and are looking forward to the weekend.

Schools and colleges are starting again and Autumn has officially arrived. As a result, temperatures are beginning to cool and trees are starting to shed their leaves. In the United States, it is the Friday before Labor Day weekend and many Americans are planning barbecues and other gatherings. In America, the song I Don't Want To Miss A Thing by Aerosmith is on top of the singles charts.

Over in the UK, If You Tolerate This Your Children Will Be Next by Manic Street Preachers is the number one hit song. Bill Clinton is currently the President of the United States and the movie Something About Mary is at the top of the Box Office. In the United Kingdom, Tony Blair is the current Prime Minister.

It's 1998, so radio stations are being dominated by the likes of Brandy, Monica, Aerosmith, R. Kelly, K-Ci & JoJo, Céline Dion, All Saints, Steps and Will Smith. A musical subgenre called "Nu metal" is beginning to take off, aided by the success of bands such as Korn. If you were to travel back to this day, notable figures such as Big L, Stanley Kubrick, Joe DiMaggio and Dana Plato would all be still alive.

Popular toys at the moment include the likes of Sylvanian Families, Yo-yo, Littlest Pet Shop and the PlayStation (PS1).

If you are looking for some childhood nostalgia, then check out September 4th, 2004 instead.

Bill Clinton was the President of the United States on September 4th, 1998.

Tony Blair was the Prime Minister of the United Kingdom on September 4th, 1998.

Enter your date of birth below to find out how old you were on September 4th, 1998.

Here are some fun statistics about September 4th, 1998.

Have something to say about September 4th, 1998?