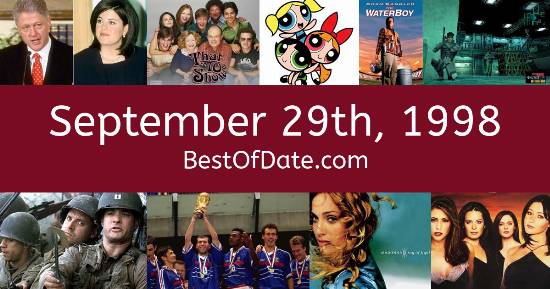 September 29th, 1998 relates to a fictional event in a movie, book, game or television series.

Songs that were on top of the music singles charts in the USA and the United Kingdom on September 29th, 1998.

The date is September 29th, 1998 and it's a Tuesday. Anyone born today will have the star sign Libra. Schools have started back and autumn has arrived, so temperatures have started to cool and trees are beginning to shed their leaves.

The earthy smells of fall have started to fill the air. In America, the song The First Night by Monica is on top of the singles charts. Over in the UK, Rollercoaster by B*Witched is the number one hit song.

It's 1998, so radio stations are being dominated by the likes of Brandy, Monica, Aerosmith, R. Kelly, K-Ci & JoJo, Céline Dion, All Saints, Steps and Will Smith. A musical subgenre called "Nu metal" is beginning to take off, aided by the success of bands such as Korn. On TV, people are watching popular shows such as "Rugrats", "Touched by an Angel", "Kenan & Kel" and "Two Guys, a Girl and a Pizza Place".

Meanwhile, gamers are playing titles such as "Resident Evil 2", "1080° Snowboarding", "World Cup 98" and "Metal Gear Solid". Children and teenagers are currently watching television shows such as "Beverly Hills, 90210", "The Nanny", "Teletubbies" and "Dawson's Creek". Popular toys at the moment include the likes of Jenga, Polly Pocket, the PlayStation (PS1) and Bop It.

Bill Clinton was the President of the United States on September 29th, 1998.

Tony Blair was the Prime Minister of the United Kingdom on September 29th, 1998.

Enter your date of birth below to find out how old you were on September 29th, 1998.

Here are some fun statistics about September 29th, 1998.

Leave a comment and tell everyone why September 29th, 1998 is important to you.