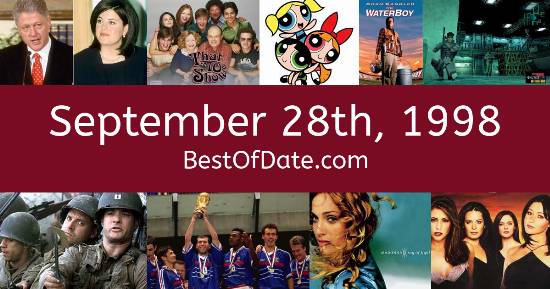 Songs that were on top of the music singles charts in the USA and the United Kingdom on September 28th, 1998:

The date is September 28th, 1998 and it's a Monday. Anyone born today will have the star sign Libra. Schools have started back and autumn has arrived, so temperatures have started to cool and trees are beginning to shed their leaves.

The earthy smells of fall have started to fill the air. In America, the song The First Night by Monica is on top of the singles charts. Over in the UK, Rollercoaster by B*Witched is the number one hit song.

It's 1998, so radio stations are being dominated by the likes of Brandy, Monica, Aerosmith, R. Kelly, K-Ci & JoJo, Céline Dion, All Saints, Steps and Will Smith. A musical subgenre called "Nu metal" is beginning to take off, aided by the success of bands such as Korn. On TV, people are watching popular shows such as "Party of Five", "Friends", "Hercules: The Legendary Journeys" and "3rd Rock from the Sun".

Meanwhile, gamers are playing titles such as "1080° Snowboarding", "StarCraft", "Tom Clancy's Rainbow Six" and "Spyro the Dragon". Children and teenagers are currently watching television shows such as "Beverly Hills, 90210", "Rugrats", "Friends" and "Daria". Popular toys include the likes of "Yo-yo", "PlayStation (PS1)", "Tamagotchi" and "Nintendo 64".

Celebrities, historical figures and noteable people who were born on the 28th of September:

Who was the Prime Minister of the United Kingdom on September 28th, 1998?

Enter your date of birth below to find out how old you were on September 28th, 1998.

Looking for some nostalgia? Here are some Youtube videos relating to September 28th, 1998. Please note that videos are automatically selected by Youtube and that results may vary! Click on the "Load Next Video" button to view the next video in the search playlist. In many cases, you'll find episodes of old TV shows, documentaries, music videos and soap dramas.

Here are some fun statistics about September 28th, 1998.