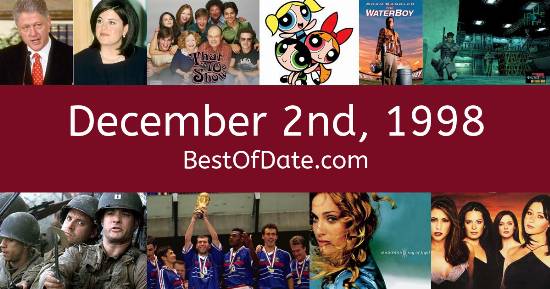 Songs that were on top of the music singles charts in the USA and the United Kingdom on December 2nd, 1998.

The movie "Rugrats Movie" was at the top of the box office on December 2nd, 1998.

The date is December 2nd, 1998 and it's a Wednesday. Anyone born today will have the star sign Sagittarius. The Christmas season of 1998 has began.

In America, the song I'm Your Angel by R. Kelly & Celine Dion is on top of the singles charts. Over in the UK, Believe by Cher is the number one hit song. Bill Clinton is currently the President of the United States and the movie Rugrats Movie is at the top of the Box Office.

US President Bill Clinton is being impeached for lying under oath and obstruction of justice. The Furby craze has started, with over 1.8 million units being sold throughout the Christmas season. If you were to travel back to this day, notable figures such as Big L, Stanley Kubrick, Joe DiMaggio and Dana Plato would all be still alive.

On TV, people are watching popular shows such as "JAG", "Everybody Loves Raymond", "Will & Grace" and "Becker". Meanwhile, gamers are playing titles such as "Tekken 3", "PaRappa the Rapper", "StarCraft" and "Mission Impossible". Kids and teenagers are watching TV shows such as "Home Improvement", "The Nanny", "Johnny Bravo" and "Mortal Kombat: Defenders of the Realm".

Popular toys at the moment include the likes of Super Soaker (water gun), Littlest Pet Shop, Bop It and Spice Girls dolls.

If you are looking for some childhood nostalgia, then check out December 2nd, 2004 instead.

Italian fashion designer. Deceased
Born on December 2nd, 1946
He was not alive on this date.

Bill Clinton was the President of the United States on December 2nd, 1998.

Tony Blair was the Prime Minister of the United Kingdom on December 2nd, 1998.

Enter your date of birth below to find out how old you were on December 2nd, 1998.

Here are some fun statistics about December 2nd, 1998.

Have something to say about December 2nd, 1998?