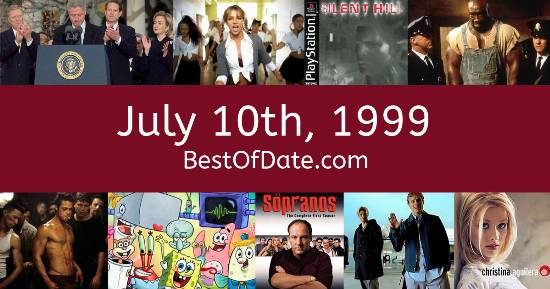 Songs that were on top of the music singles charts in the USA and the United Kingdom on July 10th, 1999.

The date is July 10th, 1999 and it's a Saturday. Anyone born today will have the star sign Cancer. Currently, people are enjoying their weekend.

Bill Clinton is currently the President of the United States and the movie American Pie is at the top of the Box Office. In the United Kingdom, Tony Blair is the current Prime Minister. Meanwhile, in technology news, CDs have become the dominant format for music. People are buying CD players and the portable CD players such as the "Discman". As a result, the older cassette tape format is continuing to decline in sales.

Soccer star David Beckham and Spice Girls singer Victoria Adams (Posh Spice) have recently been married. J. K. Rowling has just published "Harry Potter and the Prisoner of Azkaban", which is her third novel in the Harry Potter series. On TV, people are watching popular shows such as "Two Guys, a Girl and a Pizza Place", "Sex and the City", "That '70s Show" and "The Wild Thornberrys".

Meanwhile, gamers are playing titles such as "Tom Clancy's Rainbow Six", "Spyro the Dragon", "Half-Life" and "Counter-Strike". Children and teenagers are currently watching television shows such as "Arthur", "Dawson's Creek", "That '70s Show" and "The Powerpuff Girls". Popular toys at the moment include the likes of Littlest Pet Shop, the PlayStation (PS1), the Nintendo 64 and Spice Girls dolls.

If you are looking for some childhood nostalgia, then check out July 10th, 2005 instead.

Bill Clinton was the President of the United States on July 10th, 1999.

Tony Blair was the Prime Minister of the United Kingdom on July 10th, 1999.