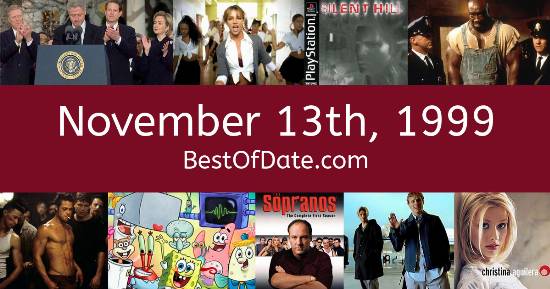 November 13th, 1999 relates to a fictional event in a movie, book, game or television series.

Songs that were on top of the music singles charts in the USA and the United Kingdom on November 13th, 1999.

The date is November 13th, 1999 and it's a Saturday. Anyone born today will have the star sign Scorpio. Currently, people are enjoying their weekend.

It's November, so the evenings are getting darker and the days are getting colder. In America, the song Smooth by Santana & Rob Thomas is on top of the singles charts. Over in the UK, Keep On Movin' by Five is the number one hit song.

Bill Clinton is currently the President of the United States and the movie Pokemon: The First Movie is at the top of the Box Office. In the United Kingdom, Tony Blair is the current Prime Minister. Meanwhile, in technology news, CDs have become the dominant format for music. People are buying CD players and the portable CD players such as the "Discman". As a result, the older cassette tape format is continuing to decline in sales.

Pokemon has become one of the most popular franchises in the world, as trading cards, toys and handheld games gross over one billion dollars. On TV, people are watching popular shows such as "Beverly Hills, 90210", "That '70s Show", "The Powerpuff Girls" and "Angel". Meanwhile, gamers are playing titles such as "The Legend of Zelda: Ocarina of Time", "Final Fantasy VIII", "Dino Crisis" and "Resident Evil 3: Nemesis".

Kids and teenagers are watching TV shows such as "All That", "Dexter's Laboratory", "Sabrina the Teenage Witch" and "CatDog". If you're a kid or a teenager, then you're probably playing with toys such as the PlayStation (PS1), the Pokémon Trading Card Game, Spice Girls dolls and Groovy Girls.

If you are looking for some childhood nostalgia, then check out November 13th, 2005 instead.

Celebrities, historical figures and notable people who were born on the 13th of November.

Bill Clinton was the President of the United States on November 13th, 1999.

Tony Blair was the Prime Minister of the United Kingdom on November 13th, 1999.

Enter your date of birth below to find out how old you were on November 13th, 1999.

Here are some fun statistics about November 13th, 1999.