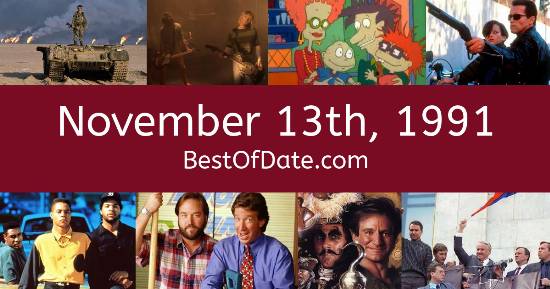 Songs that were on top of the music singles charts in the USA and the United Kingdom on November 13th, 1991:

The date is November 13th, 1991 and it's a Wednesday. Anyone born today will have the star sign Scorpio. It's November, so the evenings are getting darker and the days are getting colder.

In America, the song Cream by Prince & New Power Generation is on top of the singles charts. Over in the UK, Dizzy by Vic Reeves & Wonder Stuff is the number one hit song. George W. Bush Snr. is currently the President of the United States and the movie Curly Sue is at the top of the Box Office.

It's 1991, so the airwaves are being dominated by artists such as Bryan Adams, Michael Jackson, Roxette, R.E.M., Color Me Badd and Paula Abdul. A rock subgenre called "Grunge" is starting to rise in popularity. In Europe, the Soviet Union is continuing to dissolve. The Communist Party has been officially banned from Russia by a presidential decree.

On TV, people are watching popular shows such as "MacGyver", "Quantum Leap", "The Ren & Stimpy Show" and "Darkwing Duck". Meanwhile, gamers are playing titles such as "Duck Hunt", "SimCity", "Phantasy Star II" and "Streets of Rage". Children and teenagers are currently watching television shows such as "The Cosby Show", "Are You Afraid of the Dark?", "Clarissa Explains It All" and "Rugrats".

If you're a kid or a teenager, then you're probably playing with toys such as "Easy-Bake Oven", "Sylvanian Families", "Polly Pocket" and "G.I. Joe (figures)".

Who was the Prime Minister of the United Kingdom on November 13th, 1991?

Enter your date of birth below to find out how old you were on November 13th, 1991.

Looking for some nostalgia? Here are some Youtube videos relating to November 13th, 1991. Please note that videos are automatically selected by Youtube and that results may vary! Click on the "Load Next Video" button to view the next video in the search playlist. In many cases, you'll find episodes of old TV shows, documentaries, music videos and soap dramas.

Here are some fun statistics about November 13th, 1991.