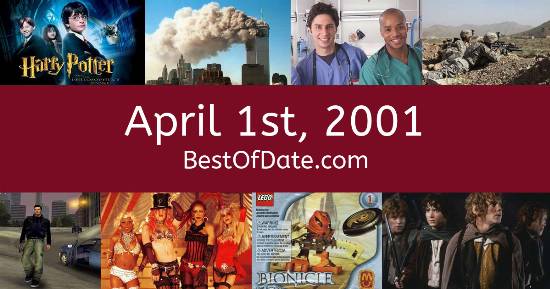 April 1st, 2001 relates to an event in a movie, book, game or television series:

Songs that were on top of the music singles charts in the USA and the United Kingdom on April 1st, 2001:

The date is April 1st, 2001 and it's a Sunday. Anyone born today will have the star sign Aries. Currently, people are enjoying their weekend.

It is April Fool's Day, which means that people are playing practical jokes on one another. The summer of 2001 is drawing closer and temperatures have started to rise. In America, the song Angel by Shaggy is on top of the singles charts.

Over in the UK, Pure And Simple by Hear'say is the number one hit song. George W. Bush Jnr. is currently the President of the United States and the movie Heartbreakers is at the top of the Box Office. In the United Kingdom, Tony Blair is the current Prime Minister.

The Nokia 3310 is one of the most popular phones on the market at the moment. It's 2001, so the music charts are being dominated by the likes of Christina Aguilera, Janet Jackson, OutKast, Crazy Town, Destiny's Child, Usher, Alicia Keys and Jennifer Lopez. People are watching popular TV shows such as "Buffy the Vampire Slayer", "The Wild Thornberrys", "Charmed" and "Andromeda".

Meanwhile, gamers are playing titles such as "Diablo II", "Final Fantasy IX", "Tony Hawk's Pro Skater 2" and "The Legend of Zelda: Majora's Mask". Children and teenagers are currently watching television shows such as "Sabrina the Teenage Witch", "CatDog", "Rocket Power" and "Malcolm in the Middle". If you're a kid or a teenager, then you're probably playing with toys such as "Groovy Girls", "The Dreamcast", "Razor (scooter)" and "PlayStation 2".

Celebrities and historical figures that were born on the 1st of April:

Who was the Prime Minister of the United Kingdom on April 1st, 2001?

Enter your date of birth below to find out how old you were on April 1st, 2001.

Looking for some nostalgia? Here are some Youtube videos relating to April 1st, 2001. Please note that videos are automatically selected by Youtube and that results may vary! Click on the "Load Next Video" button to view the next video in the search playlist. In many cases, you'll find episodes of old TV shows, documentaries, music videos and soap dramas.

Here are some fun statistics about April 1st, 2001.