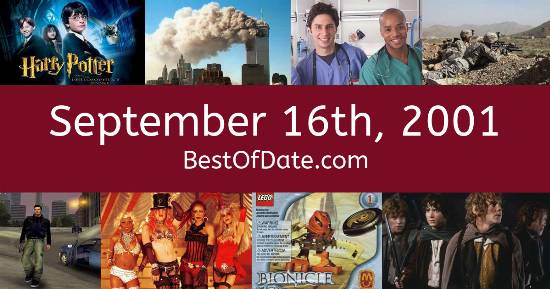 Songs that were on top of the music singles charts in the USA and the United Kingdom on September 16th, 2001.

The date is September 16th, 2001 and it's a Sunday. Anyone born today will have the star sign Virgo. Currently, people are enjoying their weekend.

Schools have started back and autumn has arrived, so temperatures have started to cool and trees are beginning to shed their leaves. The earthy smells of fall have started to fill the air. In America, the song I'm Real by Jennifer Lopez is on top of the singles charts.

Over in the UK, Mambo No. 5 by Bob the Builder is the number one hit song. George W. Bush Jnr. is currently the President of the United States and the movie The Musketeer is at the top of the Box Office. In the United Kingdom, Tony Blair is the current Prime Minister.

It's 2001, so the music charts are being dominated by the likes of Christina Aguilera, Janet Jackson, OutKast, Crazy Town, Destiny's Child, Usher, Alicia Keys, Blu Cantrell and Jennifer Lopez. An outbreak of foot-and-mouth disease in the United Kingdom is currently causing a crisis in the British agriculture and tourism sectors. Cows and sheep are currently being killed in an effort to halt the disease. The world is in a complete state of shock after the September 11 attacks, which brought down the World Trade Center and killed 3,000 people.

If you were to travel back to this day, notable figures such as George Harrison, Left Eye, The British Bulldog and John Gotti would all be still alive. On TV, people are watching popular shows such as "Touched by an Angel", "King of the Hill", "The Wild Thornberrys" and "The King of Queens". Meanwhile, gamers are playing titles such as "Tony Hawk's Pro Skater 2", "Baldur's Gate II: Shadows of Amn", "The Legend of Zelda: Majora's Mask" and "Devil May Cry".

Children and teenagers are currently watching television shows such as "Dawson's Creek", "The Wild Thornberrys", "Ed, Edd n Eddy" and "My Wife and Kids". Popular toys at the moment include the likes of Groovy Girls, Razor (scooter), Tekno the Robotic Puppy and Bratz dolls.

If you are looking for some childhood nostalgia, then check out September 16th, 2007 instead.

George W. Bush Jnr. was the President of the United States on September 16th, 2001.

Tony Blair was the Prime Minister of the United Kingdom on September 16th, 2001.

Enter your date of birth below to find out how old you were on September 16th, 2001.

Here are some fun statistics about September 16th, 2001.