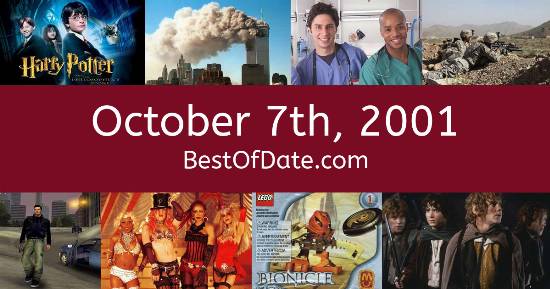 These songs were on top of the music charts in the United States and the United Kingdom on October 7th, 2001.

The following comments about October 7th, 2001 were written by our visitors.

I remember this day really well. I was just a kid and my dad was painting our hallway. Then it came on the news that the US had invaded Afghanistan. They were showing footage of buildings on fire after airstrikes.
Posted on May 17th, 2022 01:39

The date is October 7th, 2001, and it's a Sunday. Anyone born today will have the star sign Libra. Currently, people are enjoying their weekend.

The summer is long gone. Temperatures have started to become much cooler and the evenings are beginning to get darker. Fallen leaves have carpeted driveways, lawns, pathways and sidewalks and there's a fresh earthy scent in the ear. In America, the song Fallin' by Alicia Keys is on top of the singles charts.

Over in the UK, Can't Get You Out Of My Head by Kylie Minogue is the number one hit song. George W. Bush Jnr. is currently the President of the United States, and the movie Don't Say a Word is at the top of the Box Office. In the United Kingdom, Tony Blair is the current Prime Minister.

It's 2001, so the music charts are being dominated by the likes of Christina Aguilera, Janet Jackson, OutKast, Crazy Town, Destiny's Child, Usher, Alicia Keys, Blu Cantrell and Jennifer Lopez. An outbreak of foot-and-mouth disease in the United Kingdom is currently causing a crisis in the British agriculture and tourism sectors. Cows and sheep are currently being killed in an effort to halt the disease. The US invasion of Afghanistan is occurring.

If you were to travel back to this day, notable figures such as George Harrison, Left Eye, The British Bulldog and John Gotti would all be still alive. On TV, people are watching popular shows such as "Beyond Belief: Fact or Fiction", "Sex and the City", "Andromeda" and "Home Movies". Meanwhile, gamers are playing titles such as "The World Is Not Enough", "Hitman: Codename 47", "Max Payne" and "Silent Hill 2".

Kids and teenagers are watching TV shows such as "Daria", "That '70s Show", "The Wild Thornberrys" and "Malcolm in the Middle". Popular toys at the moment include the likes of Betty Spaghetty (doll), Finger skateboards, HitClips audio player and the Game Boy Advance.

These are trending news stories and fads that were prevalent at this time. These are topics that would have been in the media on October 7th, 2001.

News stories and other events that happened around October 7th, 2001.

Check out our personality summary for people who were born on October 7th, 2001.

Television shows that people were watching in October, 2001.

Popular video games that people were playing in October of 2001.

If you are looking for some childhood nostalgia, then you should check out October 7th, 2007 instead.

George W. Bush Jnr. was the President of the United States on October 7th, 2001.

Tony Blair was the Prime Minister of the United Kingdom on October 7th, 2001.

Find out what your age was on October 7th, 2001, by entering your DOB below.
This information is not saved on our server.

Here are some fun statistics about October 7th, 2001.