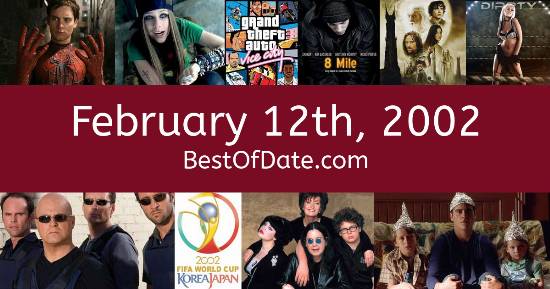 Songs that were on top of the music singles charts in the USA and the United Kingdom on February 12th, 2002.

The movie "Collateral Damage" was at the top of the box office on February 12th, 2002.

The date is February 12th, 2002 and it's a Tuesday. Anyone born today will have the star sign Aquarius. Valentine's Day is just around the corner.

In America, the song U Got It Bad by Usher is on top of the singles charts. Over in the UK, Hero by Enrique Iglesias is the number one hit song. George W. Bush Jnr. is currently the President of the United States and the movie Collateral Damage is at the top of the Box Office.

A popular software program called LimeWire is currently being used by many people to share music, software and videos. It is also a haven for computer viruses. It's 2002, so the music charts are being dominated by the likes of Ashanti, Nickelback, Nelly, Eminem, Usher, Blu Cantrell, The Calling, Linkin Park and Jennifer Lopez. On TV, people are watching popular shows such as "Last of the Summer Wine", "ER", "Sabrina, the Teenage Witch" and "The King of Queens".

Meanwhile, gamers are playing titles such as "Final Fantasy X", "Devil May Cry", "Grand Theft Auto III" and "Tony Hawk's Pro Skater 3". Children and teenagers are currently watching television shows such as "Dexter's Laboratory", "Recess", "The Powerpuff Girls" and "Lizzie McGuire". Popular toys at the moment include the likes of Groovy Girls, Poo-Chi (robot dog), the PlayStation 2 and Bratz (dolls).

If you are looking for some childhood nostalgia, then check out February 12th, 2008 instead.

Celebrities, historical figures and notable people who were born on the 12th of February.

George W. Bush Jnr. was the President of the United States on February 12th, 2002.

Tony Blair was the Prime Minister of the United Kingdom on February 12th, 2002.

Enter your date of birth below to find out how old you were on February 12th, 2002.

Here are some fun statistics about February 12th, 2002.