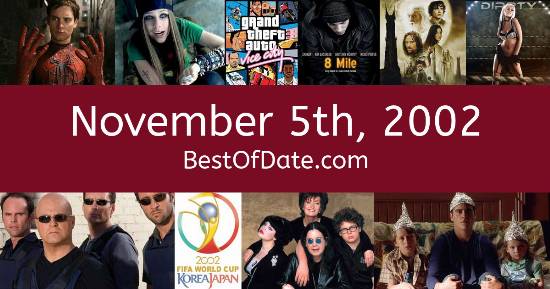 November 5th, 2002 relates to an event in a movie, book, game or television series:

Songs that were on top of the music singles charts in the USA and the United Kingdom on November 5th, 2002:

The date is November 5th, 2002 and it's a Tuesday. Anyone born today will have the star sign Scorpio. It's November, so the evenings are getting darker and the days are getting colder.

In America, the song Lose Yourself by Eminem is on top of the singles charts. Over in the UK, Heaven by DJ Sammy & Yanou is the number one hit song. George W. Bush Jnr. is currently the President of the United States and the movie The Santa Clause 2 is at the top of the Box Office.

It's 2002, so the music charts are being dominated by the likes of Ashanti, Nickelback, Nelly, Eminem, Usher, Blu Cantrell, The Calling, Linkin Park and Jennifer Lopez. A rock music genre called "Emo" is beginning to become more and more mainstream. On TV, people are watching popular shows such as "ER", "Sabrina, the Teenage Witch", "CatDog" and "Star Trek: Enterprise".

Meanwhile, gamers are playing titles such as "Metal Gear Solid 2: Sons of Liberty", "Halo: Combat Evolved", "WWF SmackDown! Just Bring It" and "Medal of Honor: Allied Assault". Children and teenagers are currently watching television shows such as "7th Heaven", "Bear in the Big Blue House", "The Wild Thornberrys" and "Jimmy Neutron". If you're a kid or a teenager, then you're probably playing with toys such as "Razor (scooter)", "Nintendo GameCube", "Yu-Gi-Oh! Trading Card Game" and "Beyblades (spinning top toys)".

Celebrities, historical figures and noteable people who were born on the 5th of November:

Who was the Prime Minister of the United Kingdom on November 5th, 2002?

Enter your date of birth below to find out how old you were on November 5th, 2002.

Looking for some nostalgia? Here are some Youtube videos relating to November 5th, 2002. Please note that videos are automatically selected by Youtube and that results may vary! Click on the "Load Next Video" button to view the next video in the search playlist. In many cases, you'll find episodes of old TV shows, documentaries, music videos and soap dramas.

Here are some fun statistics about November 5th, 2002.