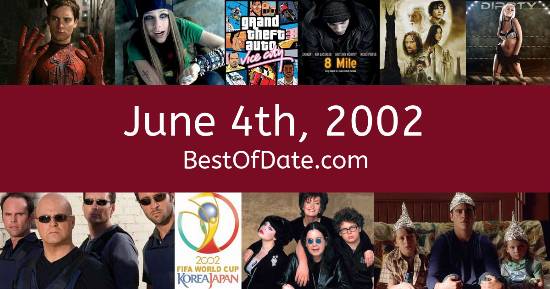 Songs that were on top of the music singles charts in the USA and the United Kingdom on June 4th, 2002.

The date is June 4th, 2002 and it's a Tuesday. Anyone born today will have the star sign Gemini. It's summer, so the temperatures are warmer and the evenings are longer than usual.

In America, the song Foolish by Ashanti is on top of the singles charts. Over in the UK, Light My Fire by Will Young is the number one hit song. George W. Bush Jnr. is currently the President of the United States and the movie Attack of the Clones is at the top of the Box Office.

A rock music genre called "Emo" is beginning to become more and more mainstream. On TV, people are watching popular shows such as "Friends", "Sex and the City", "Dora the Explorer" and "The Shield". Meanwhile, gamers are playing titles such as "Devil May Cry", "Silent Hill 2", "Grand Theft Auto III" and "WWF SmackDown! Just Bring It".

Children and teenagers are currently watching television shows such as "The Simpsons", "Recess", "The Wild Thornberrys" and "The Fairly OddParents". Popular toys at the moment include the likes of Razor (scooter), Nintendo GameCube, Yu-Gi-Oh! Trading Card Game and Beyblades (spinning top toys).

If you are looking for some childhood nostalgia, then check out June 4th, 2008 instead.

Celebrities, historical figures and notable people who were born on the 4th of June.

George W. Bush Jnr. was the President of the United States on June 4th, 2002.

Tony Blair was the Prime Minister of the United Kingdom on June 4th, 2002.

Enter your date of birth below to find out how old you were on June 4th, 2002.

Here are some fun statistics about June 4th, 2002.