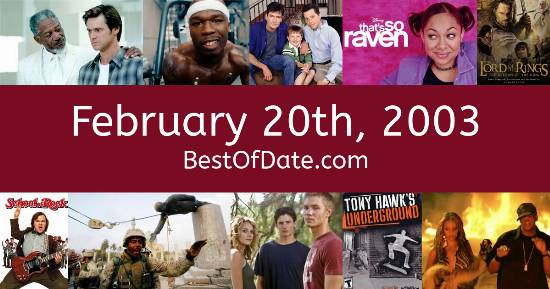 Songs that were on top of the music singles charts in the USA and the United Kingdom on February 20th, 2003:

The date is February 20th, 2003 and it's a Thursday. Anyone born today will have the star sign Pisces. In America, the song All I Have by Jennifer Lopez is on top of the singles charts.

Over in the UK, All The Things She Said by T.A.T.u. is the number one hit song. George W. Bush Jnr. is currently the President of the United States and the movie How to Lose a Guy is at the top of the Box Office. In the United Kingdom, Tony Blair is the current Prime Minister.

A popular software program called LimeWire is being used by many people to share MP3 files (and viruses). It's 2003, so the music charts are being dominated by the likes of 50 Cent, R. Kelly, Sean Paul, 3 Doors Down, Nelly, Evanescence, Chingy and Beyonce. An American restaurant owner has recently attracted media attention by renaming "French Fries" as "Freedom Fries". This was in response to France's opposition to the invasion of Iraq.

In soccer, there is currently speculation that David Beckham may leave Manchester United. This speculation comes on the back of reports that Manchester United manager Alex Ferguson threw a boot at Beckham after the team's recent defeat against Arsenal. On TV, people are watching popular shows such as "Sabrina, the Teenage Witch", "Oz", "The Sopranos" and "Malcolm in the Middle". Meanwhile, gamers are playing titles such as "Battlefield 1942", "Animal Crossing", "Grand Theft Auto: Vice City" and "Tom Clancy's Splinter Cell".

Children and teenagers are currently watching television shows such as "The Powerpuff Girls", "Malcolm in the Middle", "Grounded for Life" and "That's So Raven". Popular toys include the likes of "PlayStation 2", "Bratz (dolls)", "Nintendo GameCube" and "Beyblades (spinning top toys)".

Celebrities, historical figures and noteable people who were born on the 20th of February:

Who was the Prime Minister of the United Kingdom on February 20th, 2003?

Enter your date of birth below to find out how old you were on February 20th, 2003.

Looking for some nostalgia? Here are some Youtube videos relating to February 20th, 2003. Please note that videos are automatically selected by Youtube and that results may vary! Click on the "Load Next Video" button to view the next video in the search playlist. In many cases, you'll find episodes of old TV shows, documentaries, music videos and soap dramas.

Here are some fun statistics about February 20th, 2003.