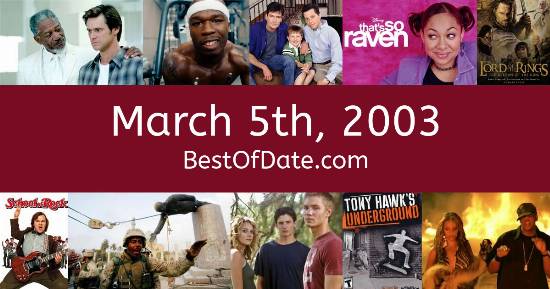 Songs that were on top of the music singles charts in the USA and the United Kingdom on March 5th, 2003.

The date is March 5th, 2003 and it's a Wednesday. Anyone born today will have the star sign Pisces. Spring has started to creep in and the days are beginning to get longer.

In America, the song In Da Club by 50 Cent is on top of the singles charts. Over in the UK, Beautiful by Christina Aguilera is the number one hit song. George W. Bush Jnr. is currently the President of the United States and the movie Cradle 2 the Grave is at the top of the Box Office.

An American restaurant owner has recently attracted media attention by renaming "French Fries" as "Freedom Fries". This was in response to France's opposition to the invasion of Iraq. On TV, people are watching popular shows such as "7th Heaven", "Futurama", "Scrubs" and "CSI: Miami". Meanwhile, gamers are playing titles such as "Battlefield 1942", "Mafia: The City of Lost Heaven", "Animal Crossing" and "Grand Theft Auto: Vice City".

Children and teenagers are currently watching television shows such as "Dexter's Laboratory", "The Powerpuff Girls", "The Fairly OddParents" and "Jimmy Neutron". If you're a kid or a teenager, then you're probably playing with toys such as the PlayStation 2, Bratz (dolls), Nintendo GameCube and Yu-Gi-Oh! Trading Card Game.

George W. Bush Jnr. was the President of the United States on March 5th, 2003.

Tony Blair was the Prime Minister of the United Kingdom on March 5th, 2003.

Enter your date of birth below to find out how old you were on March 5th, 2003.

Here are some fun statistics about March 5th, 2003.

Leave a comment and tell everyone why March 5th, 2003 is important to you.