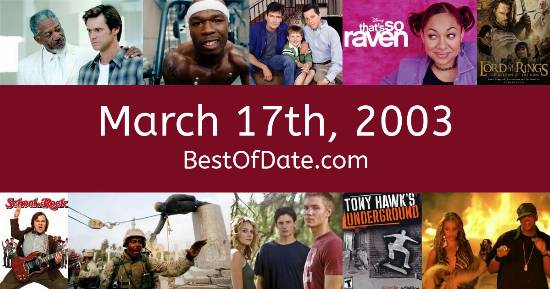 These songs were on top of the music charts in the United States and the United Kingdom on March 17th, 2003.

The movie "Cradle 2 the Grave" was at the top of the Box Office on this day.

The following comments about March 17th, 2003 were written by our visitors.

I have to say 20 years on, freedom fries has to be one of the dumbest things we have ever called fries which I believe originated in Belgium.
Posted on January 20th, 2023 00:50

The date is March 17th, 2003, and it's a Monday. Anyone born today will have the star sign Pisces. Spring has arrived and the days have become longer.

It's St. Patrick's Day, which means that a sizeable amount of people are spending their day in bars. Parades are being held in major cities throughout the world. In America, the song In Da Club by 50 Cent is on top of the singles charts. Over in the UK, Spirit In The Sky by Gareth Gates is the number one hit song.

George W. Bush Jnr. is currently the President of the United States, and the movie Cradle 2 the Grave is at the top of the Box Office. In the United Kingdom, Tony Blair is the current Prime Minister. In technology news, more and more people are beginning to gain access to the Internet. Internet speeds are increasing and MP3 sharing is beginning to threaten the existence of music stores.

An American restaurant owner has recently attracted media attention by renaming "French Fries" as "Freedom Fries". This was in response to France's opposition to the invasion of Iraq. If you were to travel back to this day, notable figures such as Barry White, Bob Hope, Charles Bronson and John Ritter would all be still alive. On TV, people are watching popular shows such as "King of the Hill", "Alias", "Smallville" and "The Wire".

Meanwhile, gamers are playing titles such as "Medieval: Total War", "Grand Theft Auto: Vice City", "Ratchet & Clank" and "Tom Clancy's Splinter Cell". Children and teenagers are currently watching television shows such as "Johnny Bravo", "The Powerpuff Girls", "Static Shock" and "The Cramp Twins". If you're a kid or a teenager, then you're probably playing with toys such as Gogo's Crazy Bones, HitClips audio player, the Xbox and the Nintendo GameCube.

These are trending news stories and fads that were prevalent at this time. These are topics that would have been in the media on March 17th, 2003.

News stories, pop culture trends, and other events that happened around March 17th, 2003.

Check out our personality summary for people who were born on March 17th, 2003.

Television shows that people were watching in March, 2003.

Popular video games that people were playing in March of 2003.

If you are looking for some childhood nostalgia, then you should check out March 17th, 2009, instead.

Celebrities, historical figures, and other notable people who were born on March 17th.

Find out what your age was on March 17th, 2003, by entering your DOB below.
This information is not saved on our server.