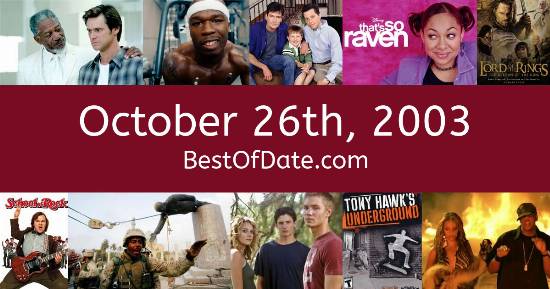 On October 26th, 2003, the following songs were at the top of the music charts in the USA and the UK.

The top "Box Office" movie on this date was the film "Texas Chainsaw Massacre".

The date is October 26th, 2003, and it's a Sunday. Anyone born today will have the star sign Scorpio. Currently, people are enjoying their weekend.

The summer is long gone. Temperatures have started to become much cooler and the evenings are beginning to get darker. Fallen leaves have carpeted driveways, lawns, pathways and sidewalks and there's a fresh earthy scent in the ear. Halloween of 2003 is just days away. People are watching horror movies and thinking about which costume they are going to wear. Others are organizing parties.

In America, the song Baby Boy by Beyonce is on top of the singles charts. Over in the UK, Hole In The Head by Sugababes is the number one hit song. George W. Bush Jnr. is currently the President of the United States, and the movie Texas Chainsaw Massacre is at the top of the Box Office.

Cameras on phones are beginning to become more and more popular. Although the photographs that they take are still lacking in quality. It's 2003, so the music charts are being dominated by the likes of 50 Cent, R. Kelly, Sean Paul, 3 Doors Down, Nelly, Evanescence, Chingy and Beyonce. Internet users are using MSN Messenger to chat with each other online.

A flash animation of badgers singing "badger, badger, badger" has become extremely popular on the Internet. The animation, which loops indefinitely, was published by British animator Jonti Picking in September, 2003. If you were to travel back to this day, notable figures such as Crash Holly, Jonathan Brandis, Pat Tillman and Ronald Reagan would all be still alive. On TV, people are watching popular shows such as "Frasier", "Andromeda", "Alias" and "The O.C.".

Meanwhile, gamers are playing titles such as "RuneScape", "Medal of Honor: Frontline", "Star Wars: Knights of the Old Republic" and "Pro Evolution Soccer 3". Children and teenagers are currently watching television shows such as "Bear in the Big Blue House", "That '70s Show", "As Told by Ginger" and "My Life as a Teenage Robot". Popular toys at the moment include the likes of Betty Spaghetty (doll), HitClips audio player, Bratz dolls and Beyblades (spinning top toys).

These are trending news stories and fads that were prevalent at this time. These are topics that would have been in the media on October 26th, 2003.

Check out our personality summary for people who were born on October 26th, 2003.

Television shows that people were watching in October, 2003.

Popular video games that people were playing in October of 2003.

If you are looking for some childhood nostalgia, then you should check out October 26th, 2009 instead.

George W. Bush Jnr. was the President of the United States on October 26th, 2003.

Tony Blair was the Prime Minister of the United Kingdom on October 26th, 2003.

Enter your date of birth below to find out how old you were on October 26th, 2003.
This information is not transmitted to our server.

Here are some fun statistics about October 26th, 2003.